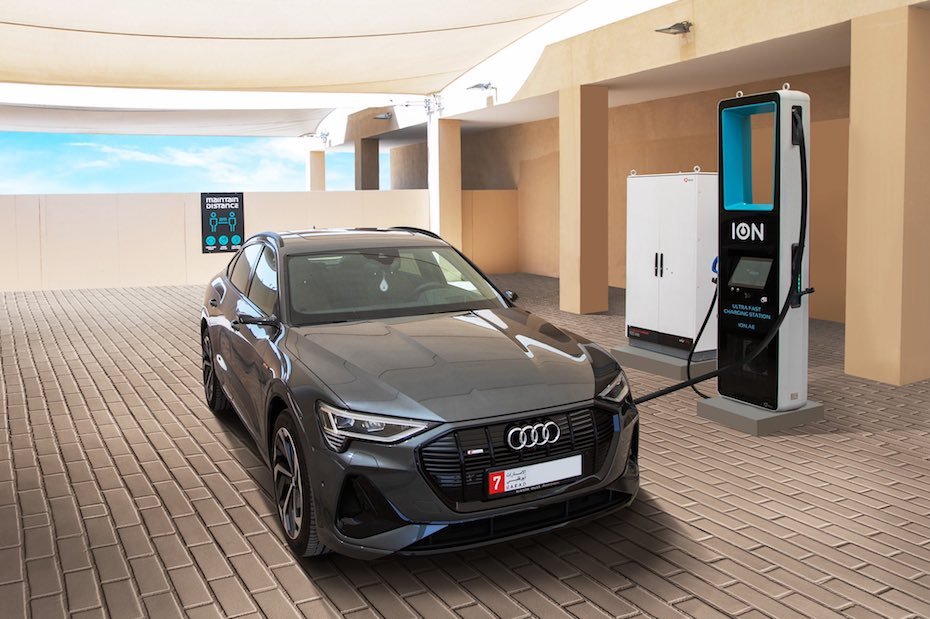 The UAE’s first ultra-fast electric vehicles charging stations has been installed on Yas Island in Abu Dhabi. It is not yet officially opened to accept customers though.

The stations with a capacity of up to 350KW were set up by Ion, the UAE-based sustainable transportation joint venture between Bee’ah and Crescent Enterprises.

The Ion stations are compatible with all EV manufacturers and will reportedly offer the fastest charging times in the UAE, fully charging vehicles in less than 15 minutes on average.

They are 25 times faster than a traditional home charger which only supplies up to 7KW.

“Ion is at the forefront of bringing transformative, green mobility solutions to the market, and we are delighted to claim we have installed the Gulf region’s first ultra-fast charging stations. This move will go a long way to promote the mass adoption of EVs which will improve air quality and reduce vehicular pollution in support the UAE’s sustainability ambitions,” said Khaled Al Huraimel, group CEO of Bee’ah and chairman at Ion.

Ion also recently concluded a successful pilot trial of the NAVYA shuttles in the University City of Sharjah as well as launching Sharjah’s first network of public electric vehicle charging stations. In partnership with NAVYA, Ion is promoting the use of shared autonomous transport to the MENA region, reported official news agency WAM.

In response to the Covid-19 pandemic, Ion’s electric vehicles and drivers were deployed, pro bono, for the transport of Sharjah Medical District’s doctors to facilitate home visits and Covid-19 testing. Its electric fleet are also utilised for medicine logistics services by University Hospital Sharjah for deliveries.

In February, Abu Dhabi launched a fleet of environmental-friendly Lithium Titanate Oxide (LTO) electric buses. The buses will be powered by the fastest charging lithium battery in the world – the LTO battery – which can be charged in less than 20 minutes. Replacing one diesel bus with an electric bus is the equivalent to reducing harmful emissions from 27 passenger cars driven for one year, and 12,175 gallons of diesel over a ten-year period.

In a video from REE Automotive, a … END_OF_DOCUMENT_TOKEN_TO_BE_REPLACED

The iPhone 12 got a fresh new … END_OF_DOCUMENT_TOKEN_TO_BE_REPLACED