No one wants to lose out on a huge opportunity, and it’s pretty clear that electric vehicles will, indeed, be a massive opportunity. But the fear of missing out (or FOMO, as the kids say these days) shouldn’t drive you to the point where you make an investing mistake. Here’s how conservative investors should probably be thinking about electric vehicle (EV) stocks today.

We all know the names of the major automakers, including the likes of Ford, Toyota, and Volkswagen, among others. The list of giants is actually pretty small, but when combustion engine cars were just starting out there were a lot more names out there vying for dominance. What we see today are the ones that managed to survive and thrive through the early chaotic days of an emerging industry. The same story holds true in industry after industry, with a rush of early players eventually shaking out to a small number of big winners. 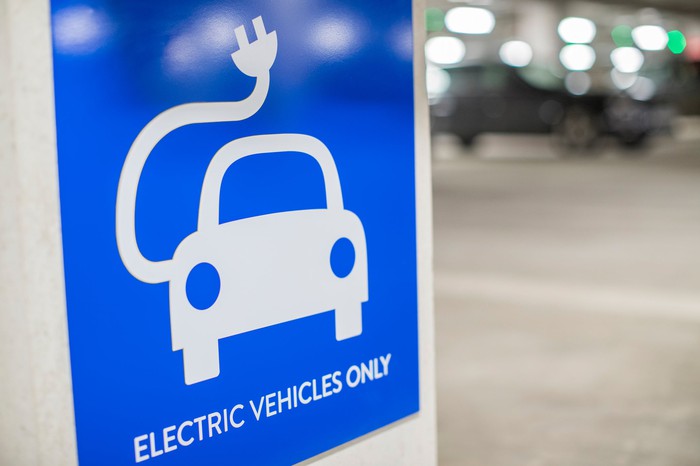 This is a big problem for investors. First off, the winners can end up being fantastic investment opportunities. So there’s a reason to be excited when you see new industries emerging. Second, and perhaps more important, it can be hard to figure out which companies will actually end up winners. Yahoo! and AOL are examples in the internet space of one-time industry leaders that eventually turned into also-rans.

Those two facts often lead Wall Street, in its exuberance, to bid up the prices of a lot of stocks in an emerging sector even though most won’t turn out to be good investments in the long term. That’s exactly what’s happening with electric vehicle stocks today.

Tesla (NASDAQ:TSLA), the poster child for electric vehicle stocks, is a great example. There’s no question about the important role this company has played in developing the EV market. However, it currently has a market cap of around $660 billion. Ford has a market cap of $58 billion with General Motors chiming in at $85 billion. It’s hard to believe that Tesla’s business is really worth 11 times as much as Ford’s or around eight times that of GM’s.

To be fair, Tesla is probably the most extreme example you can find, given the massive hype surrounding the company and its attention-loving CEO. But even the less egregious examples are still troubling. Take NIO (NYSE:NIO), which has a market cap of around $75 billion. While the company’s deliveries increased notably year over year in the first quarter, going from around 4,000 vehicles in 2020 to 20,000 this year, it is still losing money. Ford, GM, and Tesla were all profitable. Investors are clearly affording NIO a valuation on par with major, and profitable, automakers, but that’s driven by the hope of future results, not what the company’s financial statements are showing today.

There are other names in the space that haven’t been afforded the same kind of eye-catching valuations in the market. Specifically, Nikola, Lordstown Motors, and Workhorse Group, with market caps of $6 billion, $1.6 billion, and $1.6 billion, respectively. However, like NIO, they are all bleeding red ink on the bottom line and none have the scale of operations that Tesla and the traditional automakers have achieved. That said, Nikola is a frightening case in point of the valuation extremes that can take shape, noting that its market cap was around $25 billion in late 2019 and today it’s just $6 billion or so (there are company-specific reasons for this, but that doesn’t change the volatility in the stock price). 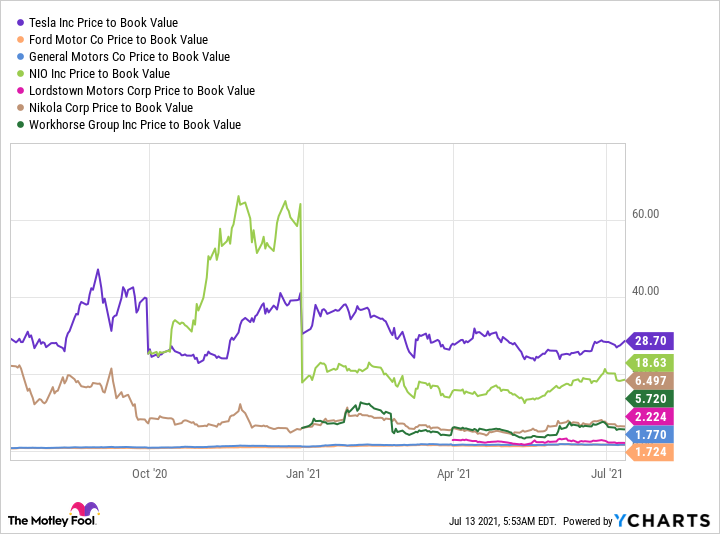 Market cap, however, isn’t really a great valuation tool. Which is why it’s so important to remember that most of the above EV stocks aren’t profitable. Basically, without earnings you can’t use price to earnings, the most traditional valuation metric, as a reference point. That said, you can use price-to-book (P/B) value, which looks at market valuation relative to balance sheet metrics. As the chart above shows, all of the EV names above have been afforded higher P/B ratios than GM or Ford. That despite the fact that they don’t have anywhere near the same industry position or business scale.

As noted, it isn’t uncommon in emerging industries for investors to bid up the prices of many stocks in the hope of finding what will likely be just a few big winners. So it really isn’t shocking that EV stocks are being favored over more traditional automakers. However, it is very clear that EV stocks look expensive when you compare them to the broader auto industry. Which is important, because the older names in the space are quickly reaching into the EV space; and they have production and sales infrastructure that the pure EV names generally lack.

In other words, the EV space is going to be competitive and it isn’t clear which pure-play EV names, if any, will come out on top. For anyone with a conservative investment style or one that’s value conscious, it’s hard to see EV stocks as anything but overhyped relative to their actual business performance at this point.

A traffic light is seen near the … END_OF_DOCUMENT_TOKEN_TO_BE_REPLACED