Electric vehicle (EV) company Workhorse Group (NASDAQ:WKHS) recovered some lost stock value last month as it prepares a lawsuit to win back a $482 million U.S. Postal Service (USPS) contract that slipped through its fingers earlier this year. Its stock price also surged in early June when it briefly achieved “meme stock” status on the Reddit WallStreetBets online discussion board, though it failed to gain the lasting traction of the bigger meme stocks.

While Workhorse could triumph in the Postal Service legal contest eventually, another sector company looks bullish for EV investors based on its current merits rather than on its hypothetical future successes: Magna International (NYSE:MGA).

On paper, Workhorse has several sources of future income lined up. It has a private sector order for 6,320 electric delivery trucks from Pride Group Enterprises. If its June 16 legal complaint to capture an initial $482 million production design contract awarded to Oshkosh Corp. (NYSE:OSK) succeeds, it would also have an inside track to a broader $6 billion in total purchases of electric USPS delivery vehicles over 10 years. However, while either of these could yield profits in the future, Workhorse has delivered very few vehicles to date. 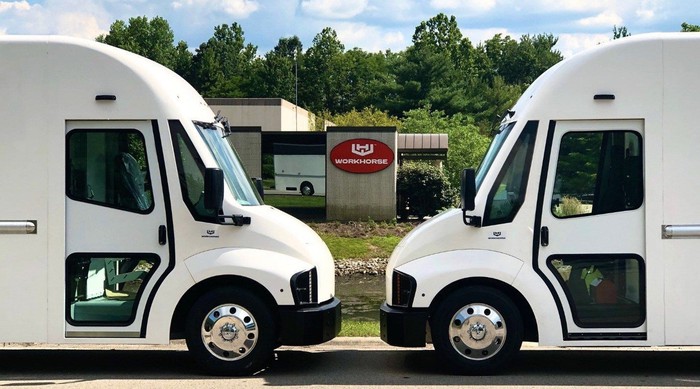 The company’s own first quarter (Q1) 2021 earnings report says it built a total of 38 vehicles during the first four months of the year. Workhorse notes this production is “more than doubling the number produced in comparison to the combined previous three quarters,” meaning it built fewer than 19 vehicles in total during the last nine months of 2020, or less than one vehicle every two weeks.

Besides its current minuscule production capacity, Workhorse’s 13 years in business have been mostly sustained by periodic investments, not revenue. Workhorse has secured multiple rounds of funding adding up to over $300 million, including a $70 million cash infusion from an institutional investor announced on July 20, 2020, and $200 million through an Oct. 12, 2020, bond issue to several institutions.

The company’s revenue, meanwhile, remains well below $1 million per quarter. During Q1 2021, its revenue totaled $521,000, a 520% year-over-year increase resulting from “a total of six trucks delivered in the first quarter.”

Operational expenses in the millions combined with revenue in the thousands lead to ongoing cash burn. Workhorse reported negative cash flow of $36.2 million during Q1 2021, reducing its available cash from $241.2 million at the quarter’s start to approximately $205.1 million at its end. With current cash burn rates, Workhorse has reserves for just over five more quarters of operation, a number possibly lowered by accelerating cash burn if it pushes production up to a dozen trucks per quarter.

Like a merchant selling picks, shovels, and sluices to Gold Rush miners, Magna International is a company supplying parts to other electric vehicle makers, enabling it to potentially profit from the whole booming market rather than relying on direct consumer sales. While the company noted semiconductor chip shortages and the lingering effects of pandemic lockdowns affected its sales, its revenue still rose 18% year over year to $10.18 billion in Q1 2021.

The success of Magna’s recent restructuring and streamlining initiatives is highlighted by its cost of goods sold — $8.66 billion — which rose 14.5% year over year and produced an 18% sales increase. This is despite the semiconductor shortage, higher raw material costs, and increased labor costs. Magna’s efficiency measures are reflected in the difference, showing effective leadership and foreshadowing even lower costs once shortages recede.

The company is directing internal investment toward building the high-growth sector of electrification, including e-drives, battery enclosures, ADAS (advanced driver assistance systems), and contract vehicle manufacturing. Its current guidance calls for its electric vehicle parts business to grow to more than $2 billion by 2023 and to over $4 billion by 2027. Several of its product lines, such as ADAS and battery enclosures, are crucial, high-cost parts of electric vehicles, and its advantage here gives Magna strong potential for ongoing profit.

Magna claims it is growing at 6% above the market over the past half-decade and has invested $12.5 billion in its own business. It also has $3.5 billion in cash and a similar amount in undrawn loan facilities, giving it the means to respond to opportunities as needed.

Given the nature of its business, it’s vital that Magna stay abreast of the latest technology developments in the electric vehicle field, and strong cash flow and cash availability at least gives it the needed foundation to do so. Fast-growing current sales demonstrate the company is offering cutting-edge EV components matching manufacturers’ needs at the present time.

The company’s executives don’t talk much about research and development, but the investor presentation mentions the expansion of the software engineering team as a priority while hinting at a focus on engineering in general. It’s impossible to predict how well a company’s future research will keep up with changing conditions, but Magna appears to have the cash and expertise to keep operating as an advanced component supplier, assuming good management also continues.

Shareholders receive a dividend from Magna, too, providing an extra benefit. It has paid regular quarterly dividends since the 1990s, with the exception of 2009 when only one dividend was paid and a handful of years when three dividends were paid. The amount of the dividend has grown yearly since 2010, continuing through two stock splits.

Choosing between the two EV stocks

In a straight-up contest between investment in Workhorse and Magna, Workhorse appears to come up short. It has relied on cash infusions from hopeful investors to remain operational for its entire history. Filling its private-sector orders depends on starting actual mass production in the future, while winning any part of the USPS delivery vehicle contract is a roll of the dice at best, and could require years of litigation even if successful.

Meanwhile, its cash is running out fast, and at current burn rates it will be forced to either issue additional stock (diluting existing share value), borrow large sums, or both, unless it can begin producing and selling large numbers of vehicles very quickly.

Magna, on the other hand, has thriving sales, earnings, and cash flow, along with direct proof its reorganization for greater efficiency is working. As a supplier of critical parts to companies building electric vehicles, it stands to benefit from the powerfully growing EV trend without the risks of direct competition against successful commercial vehicle producers like Oshkosh, or the dominant force in passenger EVs, Tesla (NASDAQ:TSLA). If it continues innovation in step with the EV market’s needs, as currently appears likely, the future looks favorable for Magna into the long term.

For Fools investing in electric car stocks or industrial stocks, Workhorse could be a winner someday, while Magna is a winner right now. The growth in EV use creates a much stronger bullish tailwind for today’s Magna than for Workhorse, making it a better choice for your portfolio in 2021.

The Biden admin has made big … END_OF_DOCUMENT_TOKEN_TO_BE_REPLACED