The acceleration towards lowering carbon output through alternative energy sources has become a top priority around the world, particularly in the transportation sector. The Biden administration is set to introduce a green infrastructure and clean energy plan which was initially estimated at $3 trillion.  First revealed last year, the plan is likely to include upgrades to municipal transit networks, expansion of broadband/wireless broadband to all Americans, as well as investment in electric vehicle infrastructure.

In the U.K., Prime Minister Boris Johnson announced plans to stop the sale of new diesel and gasoline vehicles by 2030. Many other nations are embracing the drive towards electric vehicle use as well.  Germany recently unveiled a 130 billion euro recovery budget, which specifically includes subsidies for buyers of battery powered vehicles while no funds were allocated towards combustion engine vehicles.  Israel has announced they will also phase out fossil-fuel vehicles by 2030, while China announced a similar plan by 2035.  Meanwhile, Norway plans to remove traditional gasoline powered vehicles from the road by 2025.

With forecasts of increased electric vehicle (EV) adoption,  all eyes are on the battery metals of Cobalt, Lithium and Nickel. However, the role to be played by copper in this push for a green recovery should not be underestimated.  Not only is copper used within vehicle production but is also intrinsic in the various elements of EV infrastructure. 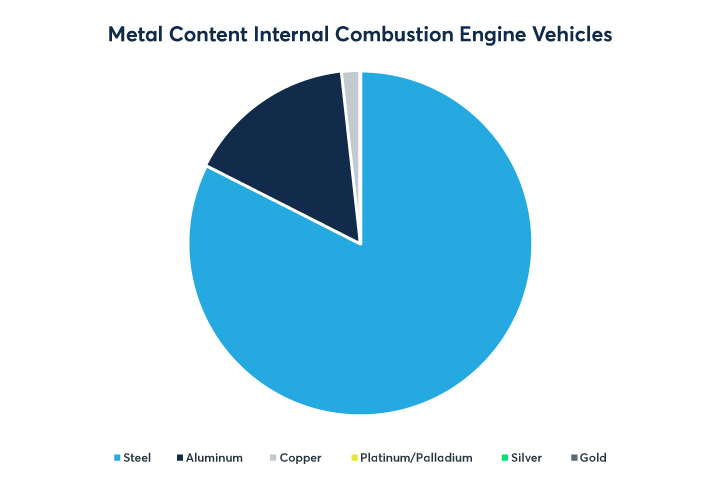 Copper Use in Hybrid and Electric Vehicles

Conductivity of pure copper is second only to silver.  With the advent of hybrid and battery electric vehicles, the amount of copper wiring used to power an automobile has increased.  There are generally three types of electric vehicles, each requiring more copper than a traditional internal combustion vehicle. 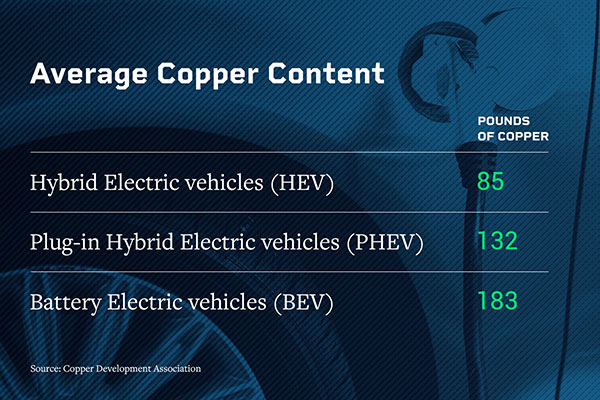 Plug-in Hybrid Electric vehicles (PHEV) operate primarily on the electric motor, using the gasoline engine purely as a back-up once the battery has run out of power.  In order to recharge the battery, the PHEV must be plugged in.

Total auto sales in the United States have been between 14 million and 18 million per year since 2012 and have decreased each year for the past 3 years.    Sales of PHEVs and BEVs, however have shown exponential growth since first being introduced in 2010. 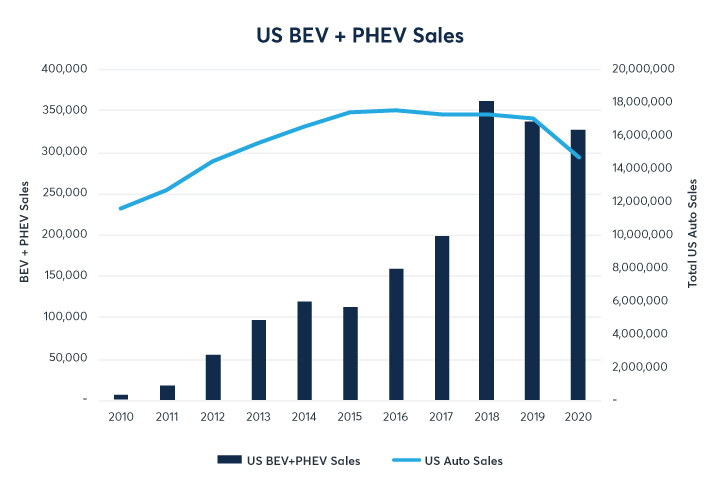 Similar trends have been seen in Europe… 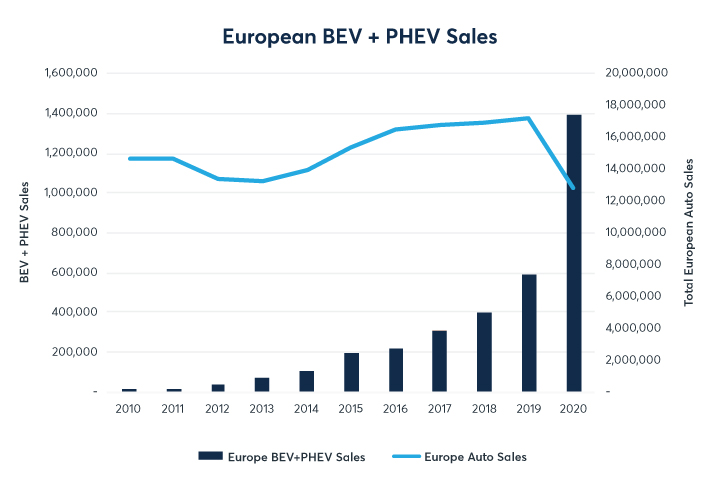 …and in China as well. 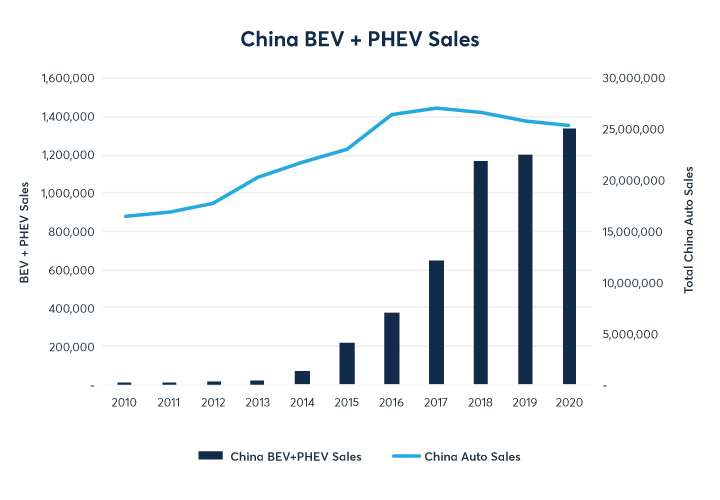 Total global sales of BEVs and PHEVs reached over 3.2 million in 2020 representing over 5% of all auto sales worldwide. 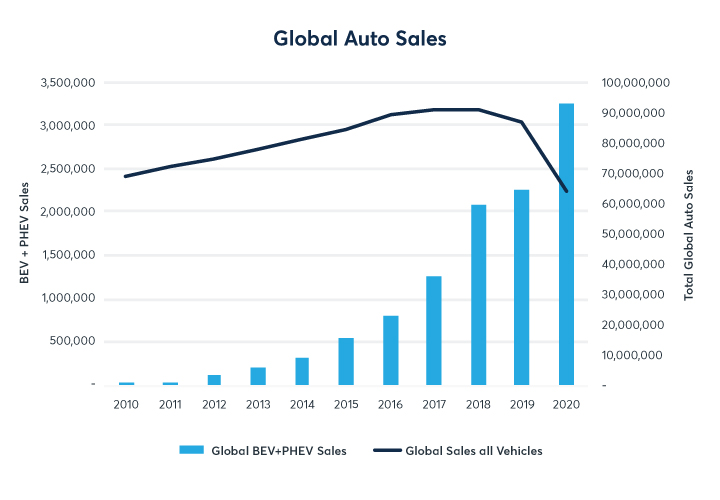 Conservatively, an equal amount of PHEV (132 lbs.) and BEV (183 lbs.) sales would equate to an additional 345 million pounds of copper needed over traditional combustion engine vehicles (51 lbs.), for vehicles sold in 2020 alone.  BloombergNEF is forecasting global sales of EVs to eclipse 54 million by 2040, representing more than 50% of total auto sales.

Additional EV demand for copper lies with the source of their power, the charging station.  While the charger itself does not have much copper in it, the wires used to connect the charger to the electrical panel as well as the charging cable itself are the main sources of copper.  Wood Mackenzie estimates by 2030, there will be over 20 million EV charging points globally, consuming 250% more copper than in 2019.

According to the U.S. Geological Survey (USGS), 2019, global copper reserves are estimated at 830 million metric tons, with annual demand being 28 million metric tons.  In addition, discovered and undiscovered deposits based on geological surveys, including reserves, total over 5 billion metric tons (USGS, 2014, 2017). Take into account that copper is 100% recyclable and it is safe to say that there is currently enough copper to meet EV demand.

As electrification of the auto industry accelerates, demand for the metals that enable the shift from traditional combustion engine vehicles to electric vehicles increases.  Whether it’s copper for wiring and cables, steel and aluminum for engine blocks or chassis, or lithium and cobalt for battery components, futures markets exist to hedge exposure to market fluctuations.

That’s important because if the forecasts are correct, demand for these metals will increase in the coming years. Copper especially could see changing demand cycles as housing and infrastructure booms and busts take shape at the same time the world demands

Your browser does not support the … END_OF_DOCUMENT_TOKEN_TO_BE_REPLACED