Electric Vehicles for the Military Still a Pipedream 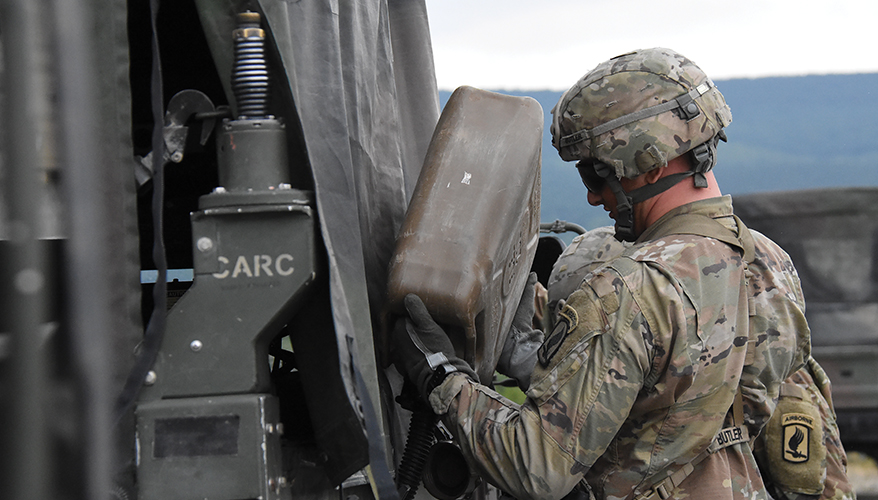 The Army for years has been making investments into the electrification of vehicles, but the widespread use of such technology won’t be feasible until the 2030s — or perhaps ever.

In a sprawling study, the National Academies of Sciences, Engineering and Medicine, said battlefields of the future will require the Army to invest in a mix of energy sources, including jet propellant 8, diesel and renewable diesel, but all-electric vehicles are not yet practical — at least through 2035.

The study — which was sponsored by the deputy assistant secretary of the Army for research and technology — tasked the Academies’ Committee on Powering the U.S. Army of the Future to analyze the energy needs of dismounted soldiers, manned and unmanned vehicles, and forward operating bases on future multi-domain battlefields.

The report — which was unveiled in June — examined technological innovations regarding energy storage, power conversion and fuel efficiency.

Despite the Army showing interest in electric vehicles, the study, “Powering the U.S. Army of the Future,” noted that all-electric ground combat platforms and tactical supply vehicles are not practical now or in the foreseeable future.

Several reasons accounted for its findings.

First, the energy density of batteries today is roughly two orders of magnitude less than JP-8, the report said. That results in excessive package weight and volume to meet maneuver requirements.

“Advances in battery energy density will undoubtedly take place, but not enough to offset that magnitude of a disadvantage,” the report noted.

Additionally, recharging all-electric vehicles in a short period of time would require massive quantities of electric power that are not available on the battlefield, the study said.

“We believe that electrification of ground vehicles is highly desirable,” said John Luginsland, the committee’s co-chair and senior scientist and principal investigator at Confluent Sciences.

“There are all kinds of advantages in terms of torque … as well as fuel efficiency,” he said during a webinar unveiling the report. However, the committee concluded that the service’s future inventory “should be hybrid-electric vehicles with internal combustion engines, not all battery electric vehicles.”

While commercial vehicle companies have made strides in electric technology, the military has unique challenges, said John Szafranski, division chief for vehicle electrification at the Army’s Ground Vehicle Systems Center.

With “silent watch and the off-road usage, we would typically consume twice the energy of an equivalent commercial vehicle,” he said in an interview with National Defense. “That means that with the battery technology today, we wouldn’t meet our range requirement or operational duration requirement.”

Recharging would also be a major obstacle for electric platforms, he added. “We can’t rely on an electrical grid to tap into.”

The numbers aren’t on the side of electric vehicles, Szafranski said. For example, if the Army had six 300-kilowatt hour battery trucks and officers needed to refuel them in 15 minutes — the same amount of time it takes to refuel vehicles with JP-8 — it would require a 7-megawatt mobile charging system, he said.

“We don’t have anything like that,” he said. “Today, our largest mobile generator is less than a megawatt and it doesn’t have vehicle charging capability. So, that would have to be developed, and then all the logistics of moving those generators around and fielding them would be very complex.”

The report noted that some observers have pondered whether nuclear power could offer the energy needed to recharge vehicles. While such a method would offer strong energy density, a mobile nuclear-based power source is not feasible in the coming years, Luginsland said.

“Mobile nuclear power plants charging all-electric battery combat vehicles will not be ready in 2035,” he said.

According to the report, the “latest design proposals indicate that such a device would weigh 40 tons, require delivery of two 20-foot ISO containers to the battlefield, and have set-up and cool-down times of three days and two days, respectively.”

Those constraints would not be consistent with the Army’s multi-domain operations strategy, it added.

Szafranski said the startup and teardown times are especially prohibitive for the technology.

“We’re an expeditionary Army,” he said. “If we stay in one place too long, the enemy can take us out. So, we’ve got to be very mobile.”

“Those are all different sectors across the spectrum, and it gets more difficult [to do electrification] the heavier” the platform is, he said.

“Sometimes people extend across the spectrum and say, ‘Hey, we’re going to have an electric tank’ — and that’s not the intent.”

While commercial industry has made great improvements in electric vehicle technology, Szafranski noted that applying those systems to the military requires significant modifications.

“We can’t apply the commercial technology directly as is,” he said. “Commercial vehicles don’t typically get shot at on the highway, but our vehicles do. So, if you have a lithium-ion battery system you need to be able to take rounds without starting a fire or explosion.”

That could mean integrating an enclosure of some sort to protect the battery system, he noted. Vehicles will also need to be designed to withstand extreme temperatures and significant vibrations.

Mark Cancian, a senior adviser at the Center for Strategic and International Studies, said that while the National Academies’ report examined the technology through 2035, he believes widespread use of electric vehicles on the battlefield even beyond that time frame is unlikely.

“Most theaters we would go into just don’t have the electrical grid that would allow us to recharge all of our vehicles,” he said. Powering up an armored brigade, for example, would require an immense amount of energy. Battery technology will also not be mature enough yet, he added.

However, there could be a few niche uses for fully electric vehicles, particularly for Special Operations Command, Cancian said.

“There may be a few specialized SOCOM vehicles where you need the stealth,” he said. Such systems could be plugged into generators to power them.

However, besides these niche applications, it seems as if very few commercial electric vehicles are going to make a transition to a military market in the near- or mid-term, or maybe ever, Cancian said.

Overall, there are few major tactical military benefits for electric vehicles, he said. They “may be a little quieter and that might be helpful, but technically they don’t give you a whole lot.”

However, despite officials and experts throwing cold water on the idea of an all-electric vehicle fleet, the Army is making targeted investments in some electric technology, including the electric light reconnaissance vehicle or eLRV.

Earlier this year, Mike Sprang, project manager at the joint program office for joint light tactical vehicles, said the eLRV is an emerging requirement for the service.

“We’re really in that learning phase right now … of what is in the realm of possible relative to commercial industry and where they’ve taken electrification, and how can electrification fill a military requirement,” he said during a webinar hosted by the National Defense Industrial Association. Contractors such as GM Defense and its parent company have made major investments into electric vehicle technology, for example.

Szafranski said he couldn’t share when the eLRV would be ready to field but noted that there has been progress in its development.

“We’ve been working with our requirements people within the Army,” he said. “There have been industry demonstrations. And so, between our technical [subject matter experts] providing input, and what they’re getting from industry, they’re able to make informed requirements.”

Demonstrations took place over the summer and a handful of companies took part, he added.

The cohort will support the Army’s modernization strategy by developing electric vehicle infrastructure in remote locations for the Army’s 225,000 vehicle fleet, the organization said in a statement announcing the winners.

While an all-electric fleet is not yet feasible, the National Academies’ report was supportive of hybrid-electric vehicles. Szafranski said this is where the sweet spot is.

Schihl said lighter trucks have the best chance of moving to the next level of development. However, “we need years of [research and development] to really get serious about a production conversation,” he said.

Meanwhile, when it comes to liquid fuel, the National Academies’ report noted that while the Army prefers to use a single fuel across its vehicles, generators and turbine-powered aircraft, diversifying its options would be beneficial.

“JP-8, diesel and biodiesel will be the primary source of battlefield energy and power for the foreseeable future,” Luginsland said. “The combination of energy density and power is unmatched.”

However, the right mix would depend on whether it was war or peacetime, the study noted.

Diesel is a reasonable choice for powering military vehicles and could be preferred over JP-8 in select climates during wartime conditions, according to the report. “It is readily abundant in many locations, which in certain situations would enable local resupply.”

Diesel has a 9 percent higher volumetric energy density than JP-8, making it possible to reduce the number of supply trucks dedicated to fuel by an equivalent amount, the report said.

During peacetime operations, biodiesel may be preferred to address environmental concerns associated with the continued use of fossil fuels, it added.

However, the study noted that the use of multiple fuels could present logistical challenges given the Army’s long-standing policy on using a single fuel type.

“The advantages of using multiple fuels … need to be balanced against the logistic complexity challenges associated with their distribution,” the report said. “If such logistics proves to be excessively challenging in certain situations, then JP-8 use remains the preferred method of transporting energy to the battlefield, to remain compatible with aircraft needs.”

However, Schihl said the fuel conversation is “extremely complicated.”

Both diesel and biofuels pose problems for the Army, he said. For example, with diesel, there is no world standard. The Army is currently avoiding biofuels, he noted.

“We tend to store fuel for quite a long time, and biofuels have a little bit of a problem with shelf time,” he said. There are concerns about the effect on storage units and propulsion systems as biofuels degrade.

David Haines, senior fellow for climate security at the American Security Project think tank, said diversification of fuel sources is important so the military can utilize whatever is available to them.

“If you’ve got technology that can … [offer the capability to] utilize fuel sources in a contingency situation where you’re not sure what you’re going to get, then you should pursue that,” he said.

If it makes sense for a commander to use a different fuel source, then they should be able to, he said.

“Diversification of fuel sources is something that is … a tactical consideration,” Haines said. “If I’m going to a place which I’m not familiar [with], I want to be able to utilize whatever I can find on the ground.”

The idiom “in demand” is defined as … END_OF_DOCUMENT_TOKEN_TO_BE_REPLACED