Eugene Reichmann is not worried that his new electric car could electrocute someone.

“[The car] is touted amongst the community as being probably the safest vehicle on the market, in terms of crash survivability of the occupants,” he said.

But he was surprised to find that his new car needs warning labels.

“It was just an annoyance more so than anything else,” he said.

“I bought the car from a dealer, the dealer should have told me, the registration papers that I received should have mentioned that there needs to be a tag on these things.”

That will not take long to sort out.

“It’s probably going to take me all of about five minutes and taking the license plate on and off is going to be the longest part of that process,” he said.

Battery power packs in these vehicles can kill someone

Queensland’s Department of Transport and Main Roads (TMR) said this was so emergency services do not get a shock when responding to crashes involving electric cars.

“The battery power packs in these vehicles can kill someone, they have that much power in them,” TMR safety and regulation general manager Andrew Mahon said.

In a car crash, that can be a risk to firefighters and paramedics attending the scene.

“So we’ve got to make sure that we look after our emergency services personnel … when they’re doing the thing that we want them to do, which is save people’s lives, and make sure that everyone’s safe at the scene of an accident,” Mr Mahon said.

“Not every vehicle identifies itself as being electric or hybrid, so it’s important to make sure we have these little labels on there that are really easy to see in an obvious spot.”

TMR has written to the owners of Queensland’s 35,000 electric and hybrid cars, notifying them that the tags need to be fitted.

The reflective tags may seem small but firefighters say it helps them identify at a glance that they are dealing with a car that has a powerful battery.

“It’s an easy identifier, so we don’t have to go around and try and find a vehicle badge or something that says it’s a hybrid or electric vehicle,” station officer Paul Omanski said.

If the crash is so bad that both number plates are unrecognisable, firefighters also have new technology to help them.

A mobile phone application allows them to identify specific cars and any dangers they may pose.

“So anyone who needs to attend to a vehicle crash involving an electric vehicle, or any other vehicle for that matter, can have access to this and it will show us all the hazards involved with that particular vehicle,” Mr Omanski said.

The app has been loaded onto more than 400 devices carried by Queensland Fire and Emergency Service units across Queensland. 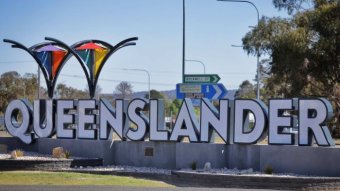 We offer tailored front pages for local audiences in each state and territory. Find out how to opt in for more Queensland news.

Once the danger is identified, crews can work to remove the risk of electrocution.

“They’ve got procedures in place to disengage that battery pack so that they make sure that there’s not a risk of an electrical shock,” Mr Mahon said.

Mr Mahon said the tags on the cars are needed for now because most of the cars on the road are still petrol powered.

“But at some stage in the future, most of the vehicles on our road may be electric or some other kind of power source and we may not need the tags anymore,” he said.

A traffic light is seen near the … END_OF_DOCUMENT_TOKEN_TO_BE_REPLACED