Mr Krisda wants EV promotion and preparation for its impact on the oilpowered car industry to go together.

Hailing 2020 as a “great year” for electric vehicle (EV) sales in the global market, Krisda Utamote, president of the Electric Vehicle Association of Thailand (EVAT), is eager to see a similar growth in Thailand with the spotlight on the EV industry.

But a focus on EV numbers alone is not enough as the state and private sector need to work on building an environment conducive to EV development, covering incentives for more production and purchases as well as bracing for the impact on internal combustion engine-based (ICE) product lines, he said.

But it decided on March 24 to increase the target to 50%, following the rapid growth of EVs in many countries, especially in Europe.

This should prompt Thai authorities to step up efforts to promote EVs and seriously consider the impact of the technological change, he said. 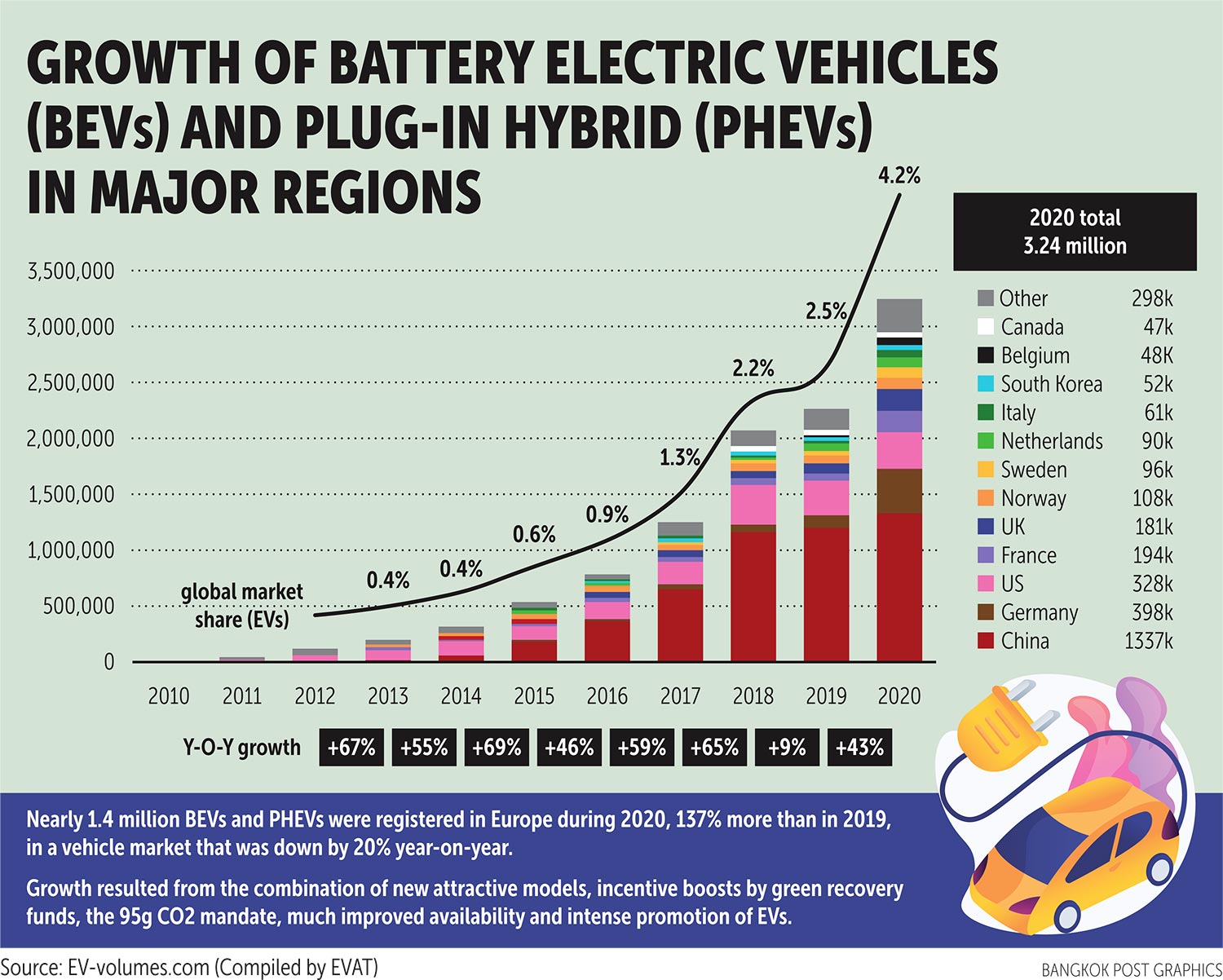 CO2 emissions are attributed for global warming and a subsequent unpleasant climate change, he said.

In Thailand, a larger number of EVs should help the government curb harmful levels of PM2.5 ultra-fine dust, mostly emitted by ageing oil-powered vehicles on crowded streets in major cities, including Bangkok.

With the 50% goal, EVAT suggests the government issues a clear EV infrastructure development plan, including increasing the number of EV charging stations.

As of November last year, the total number of EV charging outlets in Thailand stood at 1,974, covering 600 areas, according to EVAT.

The 50% goal means more charging facilities are needed and the target adjustment may also require a measure to ban ICE vehicles to better develop the EV market, he said.

With no ICE sales, all new cars will avoid producing exhaust fumes. Only battery electric vehicles, or BEVs, and fuel cell-powered cars will be used, said Mr Krisda.

Fuel cell is a technology that changes chemical energy into electricity.

A ban on ICE vehicles has been adopted in many countries, including Norway, Britain, France and India.

It may be difficult for Thailand to follow suit, but EVAT, state agencies and major car companies have begun discussing an ICE ban, he said.

“We talked about state EV policy as well as the latest update on the ICE ban,” said Mr Krisda, referring to EVAT’s recent talks with the Office of Industrial Economics and the Energy Ministry.

Any ICE ban is speculative and may not be suitable for Thailand at this moment, he said.

Growth of the EV industry will affect makers of auto parts for ICE vehicles as many of their products will no longer be in demand, with automakers switching focus to EVs, said Mr Krisda.

A technological disruption in the automotive supply chain is unavoidable and increasing annual EV sales is a sign for original equipment manufacturers in the conventional car market to consider how to balance addressing current needs for the ICE industry with future demand for EVs, he said.

Many suppliers told EVAT they agree with new investment in EV parts, but they want a clearer government policy to justify adjusting their businesses accordingly.

However, the adjustment may be difficult for small and medium-sized suppliers that lack financial flexibility, said Mr Krisda.

He said the business outlook for the ICE vehicle market requires a serious rethink in addition to state tax incentive programmes, including tax holidays of 5-8 years and import duty exemptions for cars and machinery to promote the EV industry.

Sweden-based EV business data provider ev-volumes.com reported nearly 1.4 million BEVs and PHEVs were registered in Europe in 2020, a 137% increase from 2019.

The administration of US President Joe Biden decided to have the US rejoin the Paris Climate Agreement after its withdrawal from the pact during the Donald Trump administration out of concerns over the economic burden.

This decision should also fuel EV growth, he said.

“I believe Mr Biden will push forward the EV industry rapidly because he is focused on efforts to reduce greenhouse gas emissions,” said Mr Krisda.

With so many automakers pledging to … END_OF_DOCUMENT_TOKEN_TO_BE_REPLACED

Thanks to last month's release of … END_OF_DOCUMENT_TOKEN_TO_BE_REPLACED

With the number of electric … END_OF_DOCUMENT_TOKEN_TO_BE_REPLACED