Rivian Automotive, the Irvine, Calif.-based electric vehicle maker, is in talks to build its second factory just south of Fort Worth, according to documents obtained by Bloomberg News.

Here are five things to know about the company that could potentially spend $5 billion to make Texas its second manufacturing base in the U.S.

Who’s behind the company? What kinds of vehicles do they make?

Rivian was founded by current CEO RJ Scaringe in 2009, after Scaringe received his Ph.D. in mechanical engineering from Massachusetts Institute of Technology’s Sloan Automotive Lab.

The company markets its vehicles as “electric adventure vehicles” and is targeting outdoor enthusiasts as some of its key customers. Both Rivian models, a truck and an SUV, feature a “skateboard platform” design that places the battery pack, drive units, suspension, braking and thermal system below the height of the car’s wheel, leaving room above for passengers and gear storage. The vehicles’ low centers of gravity are designed to help the vehicle adapt to different terrains.

The company has struggled in 2021 with pandemic-related supply chain shortages. CEO RJ Scaringe wrote to customers last month that the first deliveries of the company’s R1T truck, which had been rescheduled for July, would be further delayed to September. The launch of the R1S SUV has been pushed back to later in the fall.

How does Rivian compare to other electric vehicle makers like Tesla or Lucid?

Tesla Inc., viewed as the dominant player in the electric vehicle industry, currently has four vehicle models: the Model S, Model X, Model 3, and Model Y. The company has also announced plans to manufacture a pickup called the Cybertruck, but production has been delayed until 2022 at the earliest, according to Tesla’s website. The base single-engine model of the Cybertruck will start at $39,900.

Lucid closed its merger with special purpose acquisition company Churchill Capital IV last month, injecting $4.4 billion into the company and bringing its pro forma valuation to $24 billion. It plans to begin delivering its $169,000 Air luxury sedan to customers in the second half of this year.

Canoo, which announced earlier this summer that it had selected Oklahoma over Texas for its “mega-factory” manufacturing plant, has developed a van, a pickup truck and a sedan that all offer front, rear and all-wheel drive. The base model sedan, referred to as a “Lifestyle Vehicle,” will start at $34,750. Canoo plans to start delivering its vehicles to U.S. customers in the fourth quarter of 2022.

How much has the company raised? When will it go public?

Rivian has raised $10.7 billion in total capital, according to tracking site Crunchbase, and that includes $2.5 billion in new funding announced last month. Rivian’s backers include some pretty big

Earlier this year, Bloomberg reported that the company is working with underwriters including Goldman Sachs, J.P. Morgan Chase, and Morgan Stanley to prepare for an initial public offering later this year. The company could reportedly seek a valuation of around $70 billion when it goes public.

How is Amazon involved?

Amazon has been a Rivian investor through its $2 billion Climate Pledge Fund, which aims to help the company meet the standards of the Paris climate agreement by 2040.

In addition to its investments in the company, Amazon has ordered up to 100,000 electric vans from Rivian by 2030. It expects to get approximately 10,000 of those vans on delivery routes as early as 2022. The company has already begun testing versions of the vehicles on delivery routes in Los Angeles and San Francisco and plans to expand the vehicles to sixteen cities this year.

Where else does the company make vehicles?

The company’s first U.S. assembly plant is in Normal, Illinois, located in a former Mitsubishi factory. The Normal plant has over 2,200 employees and plans to grow that number to between 3,000 and 4,000 workers by 2022.

The company is also reportedly in talks to build its first plant outside the U.S. near the English city of Bristol, according to a report from Sky News. The report said the company is also considering potential sites in Germany and the Netherlands. 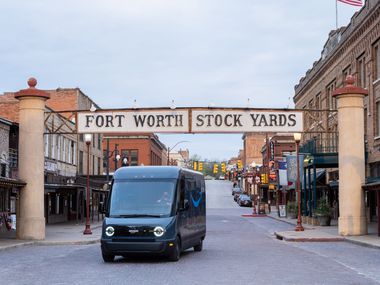 The Mercedes-Benz has priced the … END_OF_DOCUMENT_TOKEN_TO_BE_REPLACED