I-CAR in a video released earlier this year demonstrated how multiple disconnection procedures might be required on an electric vehicle to protect repairers from shock or electrocution.

These precautions could also include waiting an OEM-specified period of time between a disconnection and starting work on the vehicle. Dive right in, and the capacitators might not have had enough time to bleed out the energy stored within them — resulting in them zapping the overeager technician with potentially hundreds of volts.

It’s a critical reminder to read OEM procedures and be properly training and equipped before starting work on electric vehicles.

It’s not a situation where a repairer can wing it and figure it out, according to I-CAR technical products, programs and services Vice President Jeff Peevy. “This isn’t something you want to play around with,” he said.

Take the charger out

The featurettes concentrate on the procedures for an unspecified Nissan Leaf and begin by explaining a simple but possibly overlooked disconnection: Take the charging plug out of an electric vehicle before beginning work on a vehicle.

I-CAR director of technical programs and services Dirk Fuchs observed that normally, one would park an electric vehicle and immediately plug it in to start recharging the battery while it’s not in use.

However, connecting a charging plug also closes the contacts and makes the battery live, he said. A repairer needs the contacts open to reduce the electric risk to personnel, according to Fuchs.

“This is dangerous for us working on a vehicle,” Fuchs said. He said he understood the shop wants to return the vehicle with a full charge, but this wasn’t the time to do it.

Bud Center, I-CAR manager of technical research and development, noted that another featurette raised the importance of having the OEM procedures available before pulling the service disconnect component. A tech having them in the vehicle to review in case of an issue would be helpful, according to Center. 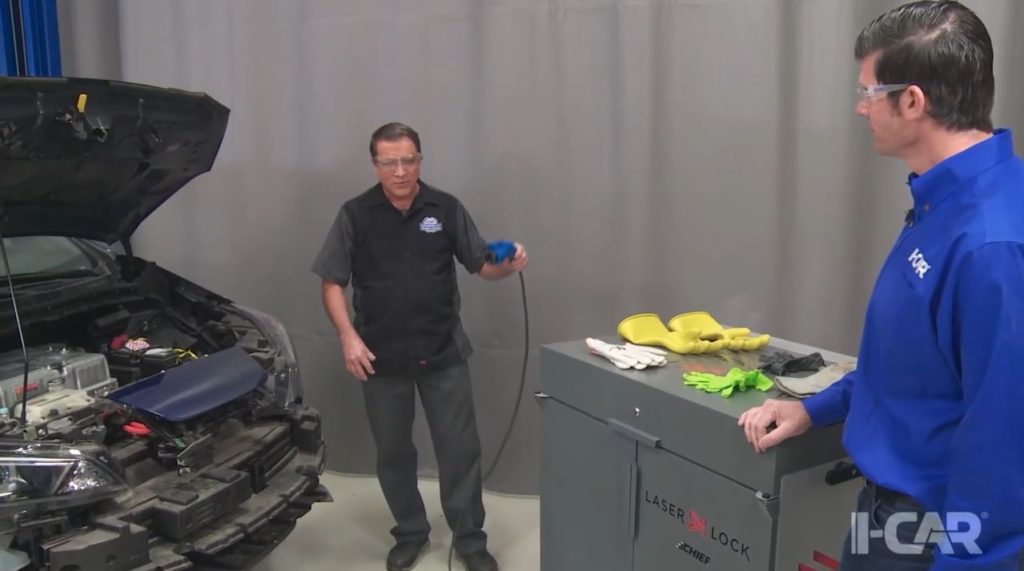 Poole in the featurette described the now-unplugged Leaf’s state as having the key and ignition off and the key removed. He said Nissan describes the key as secured on one’s person — a precaution against someone else putting it the vehicle — but I-CAR preferred to actually lock the vehicle key in a box on the other side of the shop.

Poole also described taking an even greater precaution than the OEM procedure when it came to disconnecting the 12-volt battery, the next step in making the Leaf safe.

He said the Nissan OEM procedure only requests shops remove the negative.

“I like to take that extra step of safety precaution,” and disconnect the other terminal as well, Poole said. The film encouraged repairers to tape off the components so they didn’t inadvertently “migrate over” and reconnect.

Fuchs said at this point, the battery contacts should be open. But as he also pointed out in the video, a vehicle which has been in a crash is a wild card. There’s no telling what’s been compromised.

An additional level of safety comes from the Leaf carrying an independent high-voltage battery disconnect part and procedure.

In Fuchs’ native Germany, such safety precautions are enshrined in regulation. But in the U.S., “we have to follow 100 percent the manufacturer guidelines.” (Though repairers should also review OSHA regulations; the agency does have rules related to work around high voltage. However, at least one OEM — Audi — has warned the collision industry of the risk of voltages below what OSHA considers dangerous.)

Other OEMs might have different procedures than Nissan. Poole said some could require other operations prior to disconnecting the 12-volt battery, such as using a scan tool to verify the contacts are open. Some might lack a specific high-voltage disconnect operation, he said.

Poole said he liked having the OEM procedure on hand so he understood how the interlocks on the service disconnect work. Pulling it required the component to be manipulated by hand, with gloves. Repairers should not attempt to manipulate the part with screwdrivers or other tools, according to Poole.

“You risk damaging the disconnect,” he said.

Nissan OEM procedures then call for applying insulating tape to the top of the service disconnect socket on the vehicle, according to Poole. He said this protects the socket from debris and lets staff know “they shouldn’t be tampering with that.”

The service disconnect plug removed from the vehicle would be stored elsewhere, likely the lockbox described earlier, according to Poole. (Again, this is a precaution against someone plugging it back in prematurely and risking co-workers’ lives.)

Poole described the removal as breaking the connection in the battery cell series circuits, and Poole said the removal also interrupted the interlock circuit, notifying the vehicle control unit that “‘Somebody pulled something.’”

It also might contain a hole as a safety measure. Fuchs said a repairer would run a padlock through the hole and lock it, then lock the key opening the padlock in the lockbox. (Unlike the standalone service connect plug shown in the video, battery disconnects are often tied into a wiring harness, according to Poole and Fuchs.) 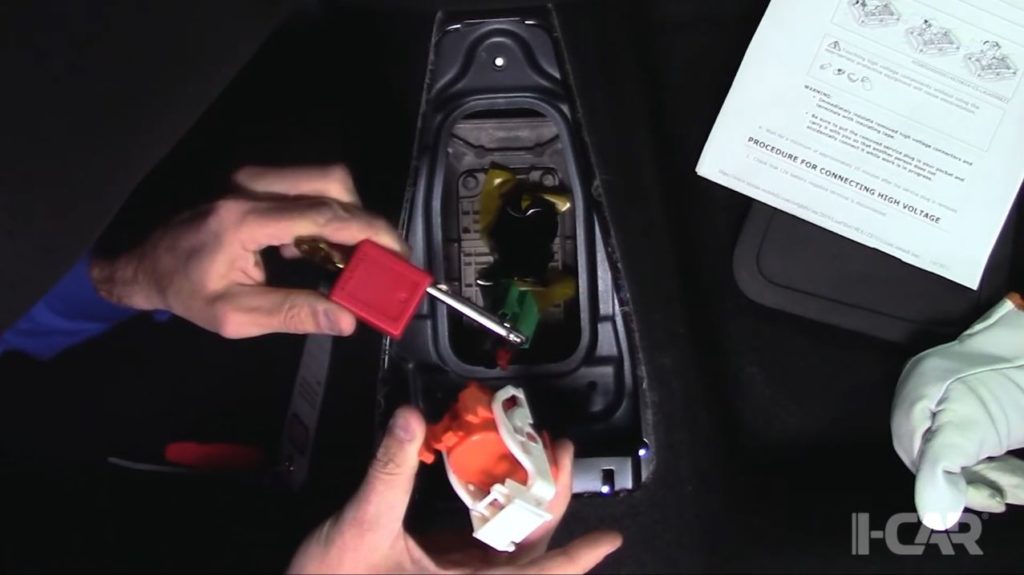 Center noted that most people might look at the OEM service disconnect procedures and conclude, “‘I’m done.’”

But Nissan’s OEM procedures call for a repairer to wait 10 minutes after that before moving on, according to Poole.

“What about that extra piece?” Center said.

The battery assembly includes capacitators, also known sometimes as condensers, according to Poole. They are “like a battery” and can also store energy, according to Fuchs.

The system is designed to feed capacitors with voltage, Fuchs said. He said he thought the Nissan Leaf had a 400-volt system, and a repairer couldn’t know how long it would take for the capacitors to discharge that power.

“That’s really dangerous,” Fuchs said. The capacitors’ charge can still electrocute a repairer, and “we can die.”

The discharge time is “really a serious thing,” he said. If the automaker instructed a repairer to wait 10 minutes, “we have to follow those 10 minutes,” he said.

A vehicle can order the capacitors to dump power in what’s known as active discharge — but a collision repairer doesn’t know that “everything works” and this would happen correctly, Fuchs said.

Instead, the repairer would wait the 10 minutes for passive discharge to let the capacitors lose energy naturally, according to Fuchs. 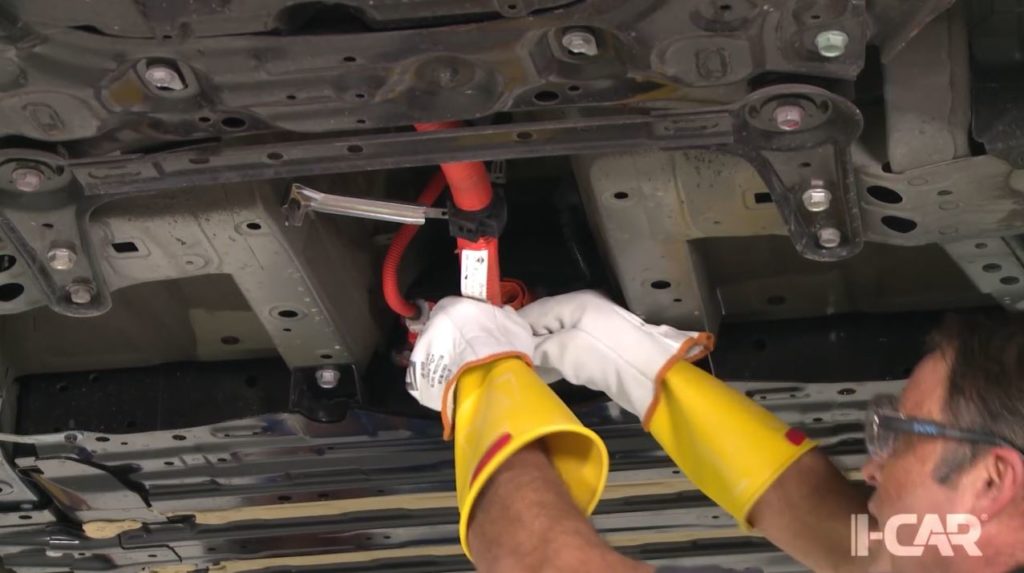 Poole said the next step would be to disconnect other electrical connectors found under the Leaf.

The video showed a giant red cable known as the main harness connector and a smaller red cable connected to the positive temperature coefficient heater unit.

These two plugs also have interlocks, according to Poole.

A repairer must examine the Leaf’s high-voltage service verification procedures, according to Poole. Repairers would follow a hyperlink to find the interlock manipulation sequence, he said.

Poole called it important to clear away debris and ensure the connector was dry.

The video then demonstrated using electrical measuring equipment to check that the vehicle was safe, and Poole also described using tape to protect the sockets. It went on to also describe the principal of bonding and insulation checks. We’ll get into these topics in a future story.

“HOW I-CAR’S TECHNICAL SERVICES, CURRICULUM AND PROGRAMS TEAM IS ON THE FOREFRONT OF VEHICLE ELECTRIFICATION” (Features edited excerpts from video)

I-CAR director of technical programs and services Dirk Fuchs holds a green battery disconnect and an orange and white service disconnect. Battery disconnects might be locked with a padlock as an safety precaution. (Screenshot from I-CAR video)

The Ministry of Road Transport and … END_OF_DOCUMENT_TOKEN_TO_BE_REPLACED