JAKARTA — Indonesia has an ambitious plan: to establish itself as a major player in the global supply chain for electric vehicles. In five years, the archipelago wants to have an integrated industry encompassing everything from upstream development — mining raw materials for use in EV batteries — to downstream — the manufacturing of batteries and the vehicles themselves.

The $17 billion plan is designed to position Indonesia, a major nickel producer, as a vital cog in the global EV market going forward, as demand for electrified vehicles is set to grow, with more and more countries looking to ban the sale of gasoline cars in the near future.

The plan took a step forward on Friday, with the country announcing the formation of a new state-owned holding company to oversee the industry development.

“IBC will manage the electric-vehicle battery industry’s ecosystem, and develop partnerships with third parties, which are the major players in the technology industry and the global market,” the SOE ministry said in a statement.

The ministry said that the company had already been approached by several global companies including players from China, Japan, South Korea, the U.S. and Europe.

That would include previously announced investment deals with China’s Contemporary Amperex Technology, better known as CATL, and South Korea’s LG Chem, both worth $5.2 billion and $9.8 billion, respectively.

American EV manufacturer Tesla has already expressed an interest in taking part, while the head of Indonesia’s Investment Coordinating Board (BKPM), Bahlil Lahadalia, said in February that Germany’s BASF, a leading chemical producer, was also in line to join the talks.

Japan’s Toyota Motor in 2019 pledged to invest $2 billion in Indonesia over four years, including spending to launch production of electrified cars.

In the newly established holding company, Mind Id and Aneka Tambang, also known as Antam, will both be in charge of mining raw minerals as well as processing them, while Pertamina and PLN will play a role in the manufacturing of battery cells and battery packs, as well as the rollout of charging stations for electric vehicles across the country.

“This year, we will start investing in development of battery cells. This will directly [involve] the four [SOEs] in IBC for battery manufacturing plant investment,” said Pahala Mansury, vice-minister of state-owned enterprise, at an online news conference on Friday. 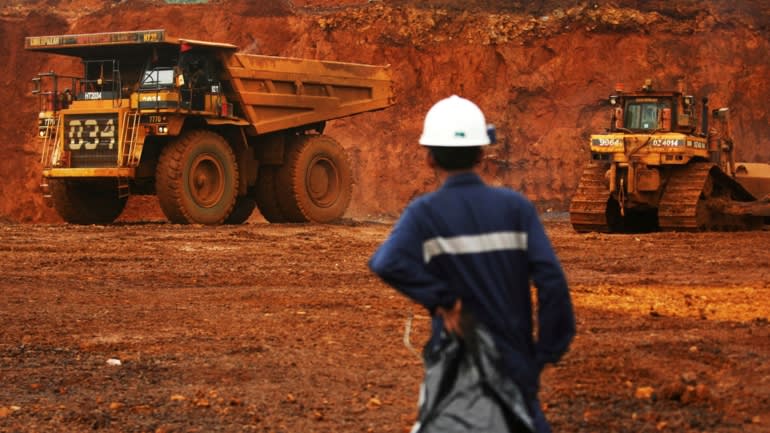 Indonesia has a fifth of the world’s nickel reserves, the biggest deposit in one country.

“Six months from now, Antam and the partner candidates will start studies and once that is finished, there will be development for the mining, then the smelting facility,” Mansury said. “[Between] 2021-2023, there will be [a tangible economic] impact, as we need a post-pandemic economic recovery.”

Agus Tjahajana Wirakusumah, head of the government’s EV battery project acceleration team, had said previously that he expected the development of the upstream sector to be finished by 2024, with the manufacturing of battery cells to be completed by 2025. He said the country would have a full EV battery industry by 2026.

Indonesia is home to a fifth of the world’s nickel reserves, the biggest deposit in one country, according to the U.S. Geological Survey. Mind Id and Aneka Tambang control 30% of Indonesia’s total nickel reserves. The government reinstated a ban on exports of nickel ore in January last year, two years ahead of its planned date, to develop the downstream industry.

The SOE ministry believes that “with the competitiveness of [Indonesia’s] supply chain, at least 35% of the electric vehicle components can be locally sourced.”

Indonesia’s plans for creating a competitive EV battery industry, as well as the prospect of investment by leading foreign companies, has led to a rally in the share prices of the country’s nickel producers in recent months.

The economic benefits that the battery industry is estimated to bring to the country is a key factor in Jakarta’s pushing for the project. The EV battery project acceleration team estimates that the industry will generate $26 billion in economic value in 2030, with 23,500 people set to be employed in the industry.

Moreover, a domestic EV battery industry would allow for increased exports of finished products and a reduction in imports of intermediate products, allowing for a $9 billion improvement in the country’s trade balance.

Indonesia recorded a trade surplus of $21 billion last year, the biggest since 2011 at the height of the commodity boom, as imports dropped amid suppressed domestic demand due to COVID-19. But the country has often posted trade deficits over the years, and a successful battery industry could go a long way toward ensuring Indonesia posts regular trade surpluses going forward.

A full EV supply chain will also go a long way to developing the domestic EV market, which has struggled to take off despite the government’s plans to bring the proportion of electrified autos, including fully electric models, up to 20% of total sales by 2025. The government has reduced taxes on imported electric vehicles, but their price remains out of reach for ordinary consumers.

CSCI; Are you looking for managed … END_OF_DOCUMENT_TOKEN_TO_BE_REPLACED

Businesses must have reliable IT … END_OF_DOCUMENT_TOKEN_TO_BE_REPLACED

In the ever-evolving world of … END_OF_DOCUMENT_TOKEN_TO_BE_REPLACED