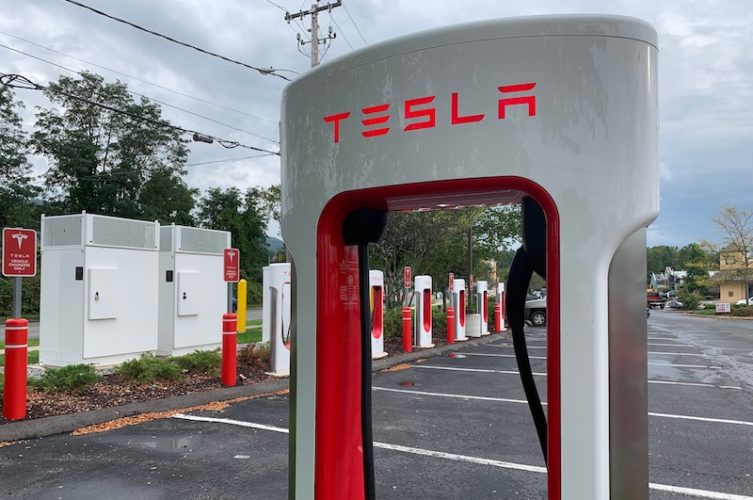 GREAT BARRINGTON — After a public outcry, a divided selectboard voted last night to impose a user-fee on electric-vehicle charging stations slated to be installed at two downtown locations.

The subject generated controversy earlier this month when taxpayers and at least one selectboard member wondered why Great Barrington should be offering “free electricity,” as one citizen put it, to downtown visitors.

So Town Manager Mark Pruhenski and his staff went back to the drawing board to perform research and determine the ins-and-outs of how a payment system might work.

Click here to view the executive summary that Town Planner and Assistant Town Manager Chris Rembold presented to the board at its regular Monday meeting. One point omitted from the summary is that there would be a two-hour limit to vehicle charges, or typically enough to drive an EV not much more than 40-50 miles. Depending on the size of the EV’s battery and other factors, most EVs take eight hours to fully charge.

See video below of last night’s Great Barrington Selectboard meeting. Fast forward to 14:00 to view the discussion on the EV charging stations:

Both stations will be so-called Level 2 stations capable of charging two vehicles at a time. The first to be installed will be in the Taconic parking lot. It will be located in the portion of the parking lot immediately to the left of the entrance driveway that travels downhill from upper Railroad Street.

The idea behind offering free charging is that it will attract people to downtown and that EV owners will patronize local businesses while their cars are charging. In addition, the stations will make a statement that Great Barrington is environmentally conscious and supportive of low-carbon alternative energy sources that are climate-change-friendly.

“Some areas don’t charge [for the electricity] because they feel that it is something that brings people into the area,” Rembold explained. “This is common. It’s an amenity to customers. We’d hope that customers come in and plug in their cars, walk around town and use the services and support the stores.”

The Taconic lot, which is adjacent to Rubiner’s and Carr Hardware, will soon get a redo that includes repaving and drainage work. The lot directly between the Barrington House and the Triplex is privately owned and not part of the project.

A similar station will be installed behind Town Hall. The exact location and a schedule for the work have yet to be announced. First-term selectboard member Garfield Reed reiterated his opposition to free charges for EV owners, insisting that, “It’s a bad business proposal” and that, “We can’t gamble with other people’s money.”

“People have come to me asking me that we not do this,” Reed said. “I also think it’s a bad idea. Tesla chargers at Big Y are not free. If Tesla can charge, so can Great Barrington.”

Selectboard member Leigh Davis, who endorsed Reed’s candidacy when he ran for the board earlier this year, said she was conflicted. She liked the message free charging would send on climate change but was concerned about the expense to the town.

“Listening to the citizens, I think we owe it to them to at least cover the costs,” Davis said.

Rembold, who did not make a recommendation but merely provided research to the board, said the stations, which retail for about $25,000 apiece, would cost approximately 75 cents to $1.10 per hour of electricity drawn at current rates. He said the stations can come equipped with credit card machines and that billing could be based on the amount of electricity drawn or on the duration of the plug-in. All current models of EVs could receive a charge at the stations.

“It’s really scalable in terms of how this is set up,” Rembold continued. “Some are set up on a subscription system so that folks can just use their credit card and the Town’s not really involved at all.”

Selectboard member Eric Gabriel, an electrician by training, said he viewed free charging as “helping advance new technology,” so he had no problem with letting those passing through town fuel-up their EVs free of charge.

“Its an incentive because sooner or later we’re all going to be driving an electric car,” Gabriel said. “I see it as a greener option promoting a healthier environment.”

“Anyone driving an electric car can afford a couple of bucks,” added board member Ed Abrahams. “Either way, I will support it. I agree with Eric. It’s a new technology, a green technology. We’ll all have the benefit of not breathing the exhaust from those using it.”

Sharon Gregory, a former chair of the town Finance Committee who also served on the Great Barrington Parking Committee, said she was troubled that the stations would eliminate parking spots in a town whose parking problems are already legendary.

“I find it a bit ludicrous that we would take two more parking spots for this good two-shoe idea when we have so many places — The Co-op, Big Y — where people can stop and refuel,” Gregory said.

In the end, the board voted 3-2 to charge visitors for charging, as it were. That will surely satisfy town residents Charlie Williamson and Jim Bailly, both of whom complained about EV owners receiving free fuel courtesy of the taxpayers, many of whom are not even wealthy enough to buy an electric car for themselves.

CSCI; Are you looking for managed … END_OF_DOCUMENT_TOKEN_TO_BE_REPLACED

Businesses must have reliable IT … END_OF_DOCUMENT_TOKEN_TO_BE_REPLACED