South Korea’s LG plans to invest $5.2bn to start producing the chemicals and materials used in electric vehicle batteries, as the global industry leader urgently tries to cut its dependence on China.

The four-year investment by the world’s biggest EV battery maker comes as plans by countries and carmakers to pivot away from fossil fuel-powered vehicles are complicated by the industry’s heavy reliance on refineries and factories in China. The country is by far the planet’s largest processor of most of the minerals needed for battery production.

LG Chem, the parent of the conglomerate’s battery group LG Energy Solution, said on Wednesday it would diversify its production of important materials including those used in cathodes, anodes and separators.

LG will hunt for investments and partnerships across mining, smelting and refining companies to improve its metal sourcing, Shin added.

South Korea is home to several of the world’s leading EV battery makers such as LG Energy Solution, as well as units of conglomerates SK and Samsung. LG Energy has battery production plants in China, Poland and the US, and in Korea. In March, the group announced a plan to invest $4.5bn by 2025 to expand its battery production in the US. The company supplies automakers including Tesla, General Motors and Volkswagen.

The battery materials market is forecast to more than double to about Won100tn ($87bn) by 2026 from Won39tn, LG said.

To meet that demand, LG said it would start building a cathode materials plant in Korea in December with an annual capacity of 60,000 tonnes. It expects its cathode production capacity to increase nearly seven-fold from 40,000 tonnes this year to 260,000 in 2026.

The company will also seek mergers and acquisitions or joint ventures to expand its business for important battery components known as separators, and set up an overseas manufacturing base, Shin said.

Analysts expect LG’s move to help reduce global dependence on China for the processing of battery materials. Korean companies have been wary of relying too much on one source since Japan imposed export controls on semiconductor components in 2019. Beijing in 2010 cut off exports of rare earth elements to Japan.

“The news will be welcomed by global EV makers who are keen to reduce their material sourcing risks as securing a stable supply chain has become ever more important for them,” said Park Kang-ho, an analyst at Daishin Securities. 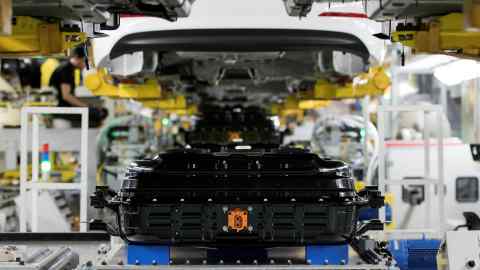 LG Energy has been hit by a fall in new orders as concerns rise over the reliability of its technology following big recalls of EVs using LG’s batteries. Its current order book is worth Won180tn.

Kim Young-woo at SK Securities said LG’s quality problems with batteries produced in its China plant had underscored the need to shore up its supply chain.

However, analysts warned the plans would add pressure to South Korea’s efforts to cut its carbon emissions. LG has pledged to use renewable energy for all its production but has not given a specific timeframe for doing so.

How to Succeed With the Help of the … END_OF_DOCUMENT_TOKEN_TO_BE_REPLACED

A traffic light is seen near the … END_OF_DOCUMENT_TOKEN_TO_BE_REPLACED