LOVELAND, Colo. (CBS4) – In hope of learning more about the electric vehicle industry, in order to advocate for more government financial assistance for the industry, Sen. John Hickenlooper visited a Northern Colorado company tackling a niche market. Lightning E-Motors, a business located in the old Hewlett Packard (HP) plant in Loveland, is in the business of retrofitting gasoline and diesel fleet vehicles with full-electric motors. 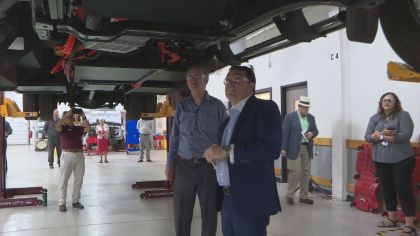 While many companies, like Tesla and Ford, are making millions of electric vehicles a year, Lightning co-founder Tim Reeser says his company is targeting the larger gas-guzzling vehicles that traffic roadways daily.

“(Most consumers) think about the car we are going to drive. We don’t think about the number of commercial vehicles,” Reeser said. “We build all the electric vehicles no one else is building, or nobody else wants to build.”

Reeser’s company has already built customized electric motors for hundreds of fleet vehicles. Transportation vans like those seen at the airport, delivery trucks and even old public transit busses are now back on the road emitting no fumes into the air. One bus that was set to be scrapped by the City of Boulder was retrofitted with a new electric motor by Lightning. The bus now operates off of electric power, oftentimes solar, and is expected to last many years.

“This is the first time you can stand and say we have a fighting chance,” Hickenlooper told CBS4’s Dillon Thomas. 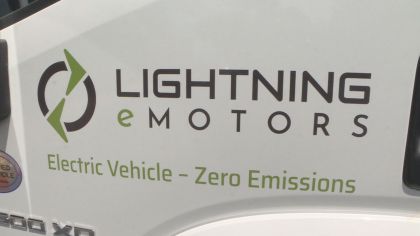 Hickenlooper is co-sponsoring the RECHARGE Act in congress. The bill would enable accessibility and affordability to the charging infrastructure across the nation. Hickenlooper said companies like Lightning E-Motors are some of those he hopes to assist with government financial incentives.

Reeser said financial assistance, partnered with regulations to carbon-emitting vehicles, can give his company a tailwind to thrive in the evolving motor vehicle industry.

Lightning saw its orders skyrocket from 200 in 2020 to more than 1,200 in 2021. Reeser said the plant hopes to double the size of its staff in the coming year in order to meet demand.

Hickenlooper and Reeser climbed into a large box truck that was operating off of electricity. The engine, supplied by Lightning, could carry thousands of pounds of goods for roughly 100 miles before needing a charge. Reeser said many fleet vehicles, like busses and large trucks, won’t travel more than 100 miles in a day.

Hickenlooper said the truck he drove, and a bus he rode in, were quick and quiet. He daydreams about the day his neighborhood street, which attracts many cars, will be quiet. Not because cars do not exist. Rather, because their engines are nearly silent due to running off of electricity.

“When people drive the vehicles they find out they are fundamentally a better vehicle. It is not just about sustainability or climate change, it is about technology and innovation,” Reeser said.

“(The retrofitted vehicles) are six times more efficient and it doesn’t put any kind of Co2 in the atmosphere,” Hickenlooper said. “A fleet is a way of accelerating the transition, the change into a new world where everything becomes electric.” 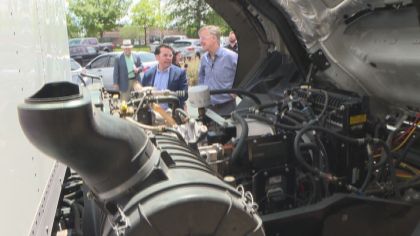 Hickenlooper said his hands-on experience at the Lightning E-Motors plants will give him more understanding and leverage in Washington when he is negotiating for more money for the electric vehicle industry.

How to Succeed With the Help of the … END_OF_DOCUMENT_TOKEN_TO_BE_REPLACED

A traffic light is seen near the … END_OF_DOCUMENT_TOKEN_TO_BE_REPLACED