Local officials acknowledged the public’s hesitancy to transition to electric vehicles, but they’re hoping an acceleration to EV at the state level may provide the spark that ignites large-scale conversion.

During the eighth annual Maui-based Hawaii Energy Conference last week, a presentation by Ulupono Initiative provided an update on the state’s progress toward electrification of transportation amid a new mandate that Hawaii change 100 percent of its light-duty passenger vehicles to electric by 2030 and the rest of its light-duty fleet by 2035.

Gov. David Ige on Thursday signed that mandate, along with two other bills, into law. The three bills expand the state’s use of electric vehicles to help meet Hawaii’s clean energy goals.

Despite Hawaii’s ambitious energy goals, though, officials acknowledged during the energy conference presentation that there is public hesitancy to switch to electric.

Some challenges include ensuring there are enough electric vehicle charging stations for people who can’t charge at home, upfront capital costs to invest in the vehicle and the human pattern toward being creatures of habit, they said. 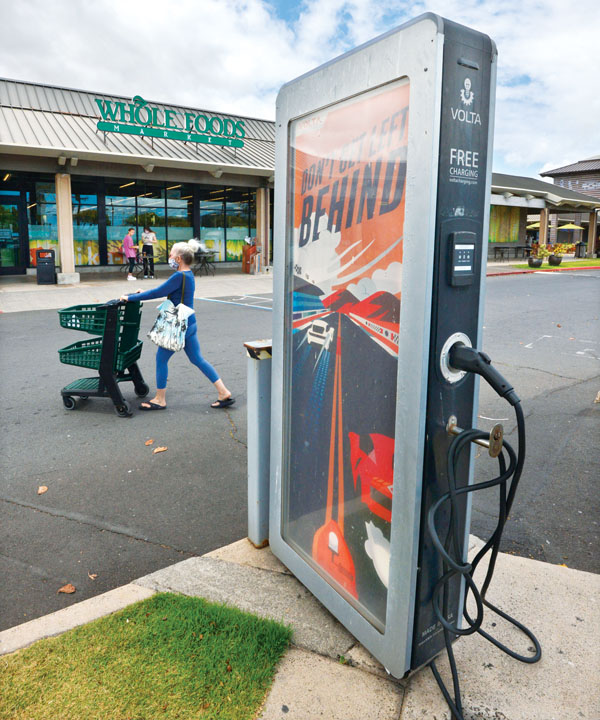 Volta chargers fronting Whole Foods in Kahului are pictured recently. State Department of Transportation is in the process of switching 100 percent of its light-duty fleet to zero-emission vehicles by 2035. The Maui News / MATTHEW THAYER photo

State Department of Transportation Maui district engineer Robin Shishido said he experienced “range anxiety” when he drove his personal electric vehicle for the first time from his home to the summit of Haleakala National Park.

“I took our EV up to Haleakala and I think when I left my house, I had 180 miles of range,” Shishido said during the presentation. “I got up there. I ended up with like 75, so I got a little nervous, but all the way down with the regenerative braking, I think I ended up back at my house with 130. So, you know, net was only using 50 miles going all the way to the summit.”

He said it’s helped to know that many charging stations exist around the island.

The presentation said that most EVs can drive from Hilo to Kona and back on one charge, which is a drive of more than 76 miles one way.

Beyond personal vehicles, officials are hoping that the state commitment to convert its fleet will lead the charge for the larger-scale transition.

“If we’re going to hit our 2045 goals, the state has to lead,” said state DOT Deputy Director Ed Sniffen during the presentation. “We have to start converting our vehicles, make it easier for everybody else, then the public can follow.”

Sniffen said his department has 300 vehicles; of those, 240 may convert to electric and 60 may be removed from the fleet.

Sniffen added that Tesla, Bolt and Leaf were compared for the state contract. Tesla came out on top for cost, resale value and maintenance record, along with system upgrades and support.

Beyond environmental benefits, the state’s transition to electric vehicles will save taxpayer money, officials said. DOT estimates 75 percent cost savings in vehicle maintenance over the lifetime of the vehicle and between $200 to $200 per vehicle per year in fuel.

While the benefits abound for electric vehicles, lawmakers said they understand when people are hesitant to make the switch.

“It’s always hard to start doing something new — you’re used to something you’re comfortable with. This is sort of like basic human psychology,” said state House Chairwoman Rep. Nicole Lowen in the presentation.

Lowen said that in this case, supply will build demand as the government takes the lead.

“A lot of Hawaii’s workforce works in government; you’re just really expanding that exposure to EVs. And I think that will help to build the market,” she added.

Ige at the Oahu news conference last week praised Hawaii’s leadership, saying the state was the first state to commit to 100 percent renewables as well as the first to commit to the Paris Agreement.

Still, work needs to be done, he said.

“Ground transportation here in Hawaii accounts for about a quarter of greenhouse gas emissions,” Ige said. “It is a large contributor to our dependence on imported fossil fuel. Coupled with our renewable energy goals, electric vehicles support the transition away from coal and fossil fuels to clean, renewable energy.”

The governor signed into law the following three bills:

¯ House Bill 424, which requires all state agencies to “adopt a preference for renting electric vehicles or hybrid vehicles” for state employees, “provided that such a vehicle is suited for the specific travel requirements and available when needed.”

¯ HB 552, which establishes clean ground transportation goals for state agencies, including the transition of 100 percent of their light-duty vehicles to zero-emission ones by Dec. 31, 2035.

¯ HB1142, which allocates three cents of the barrel tax to funding for the installation of EV charging systems via a newly established subaccount in the Public Utilities Commission’s special fund for a rebate program. It also sets penalties for parking in an EV charging system space while not actively charging and mandates new charging systems to be at least Level 2 and network capable starting in 2022.

HB 424, authored by South Maui Rep. Tina Wildberger, who was at the news conference last week, lays the groundwork for the rental car industry to invest in Hawaii’s “clean transportation future.”

“It signals to rental car companies that they can invest in an EV fleet and those vehicles will get rented by state employees traveling on state business,” she told The Maui News on Sunday. “It’s a significant market share.”

Presented by Maui Economic Development Board and supported by the County of Maui Office of Economic Development, the Hawaii Energy Conference on Tuesday and Thursday explored “Energy Transition in Hawaii: Focus on investments in people and projects.”

Typically held in person on Maui prior to the pandemic, the conference annually gathers regional and national experts on energy policy, strategies, leadership and innovation to present for hundreds of attendees across various industries.

* Kehaulani Cerizo can be reached at kcerizo@mauinews.com.


Today’s breaking news and more in your inbox

A traffic light is seen near the … END_OF_DOCUMENT_TOKEN_TO_BE_REPLACED