I just published a report on the 30 best selling electric cars and SUVs across 10 European countries. The model races and rankings are always fun, but there’s more to explore and compare than just models. As we all know by now, some companies have focused on a small number of models (sometimes out of necessity), whereas others have been rolling out a larger number of models and spreading the electrons across styles, sizes, and tastes. 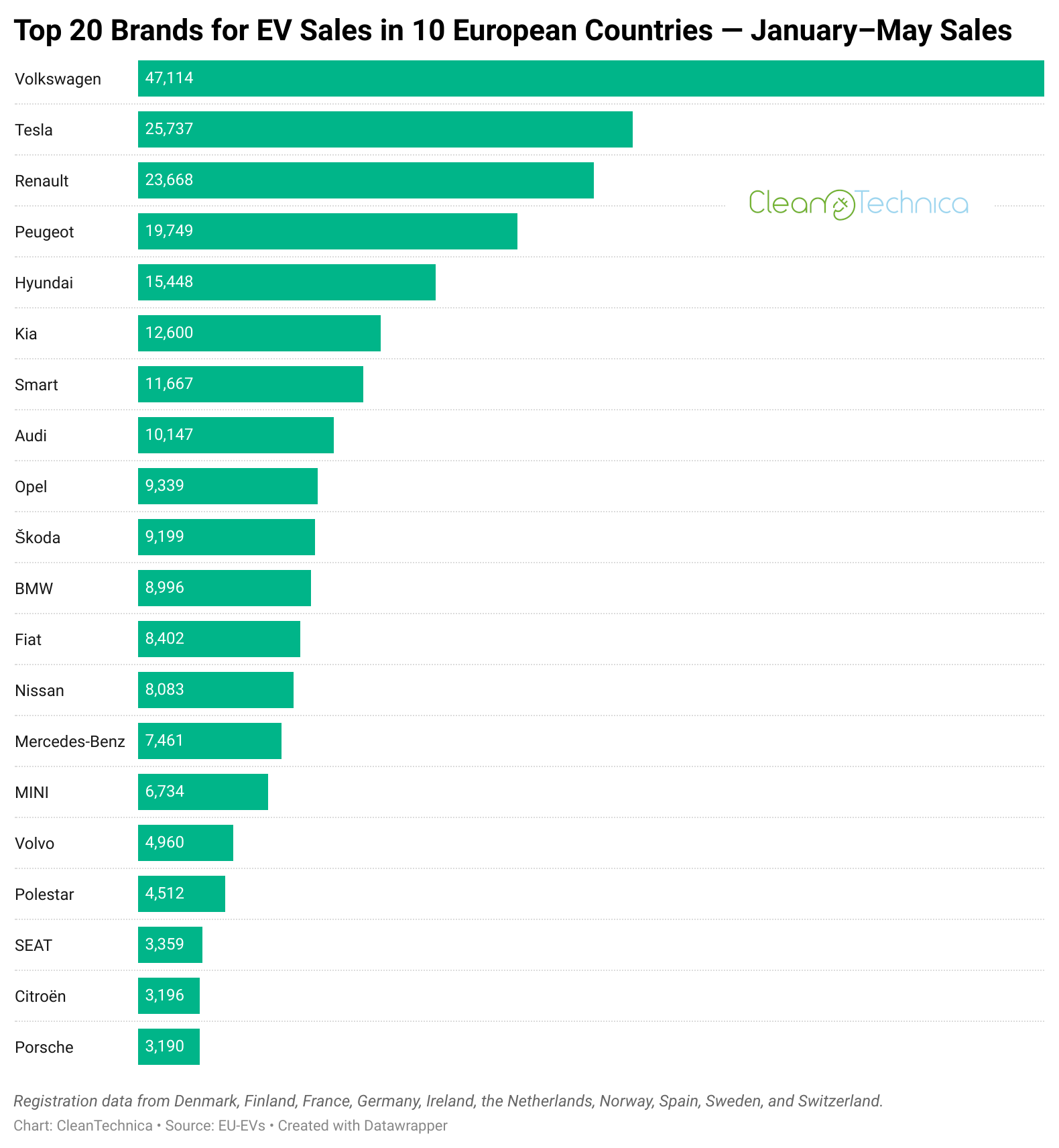 Looking across the same 10 European countries as before — Denmark, Finland, France, Germany, Ireland, the Netherlands, Norway, Spain, Sweden, and Switzerland — the clear brand leader is Volkswagen, with 18.3% of the pure electric vehicle sales across those 10 markets. That’s nearly one out of every five electric vehicles sold in those 10 countries.

Tesla, still carried by just the top-selling Model 3, is #2, holding 10% of EV sales. Renault is not far behind, with 9.2% EV market share, but expect Tesla to grow its lead notably in June, and probably further through the end of 2021.

Hyundai’s partner in crime, Kia, comes right after Hyundai in #6, which brings up another matter. You can look even broader than brands and examine the results of automotive groups and alliances as well. I’ll come back to that in a minute, after looking at the most recent brand stats across these markets — May sales. 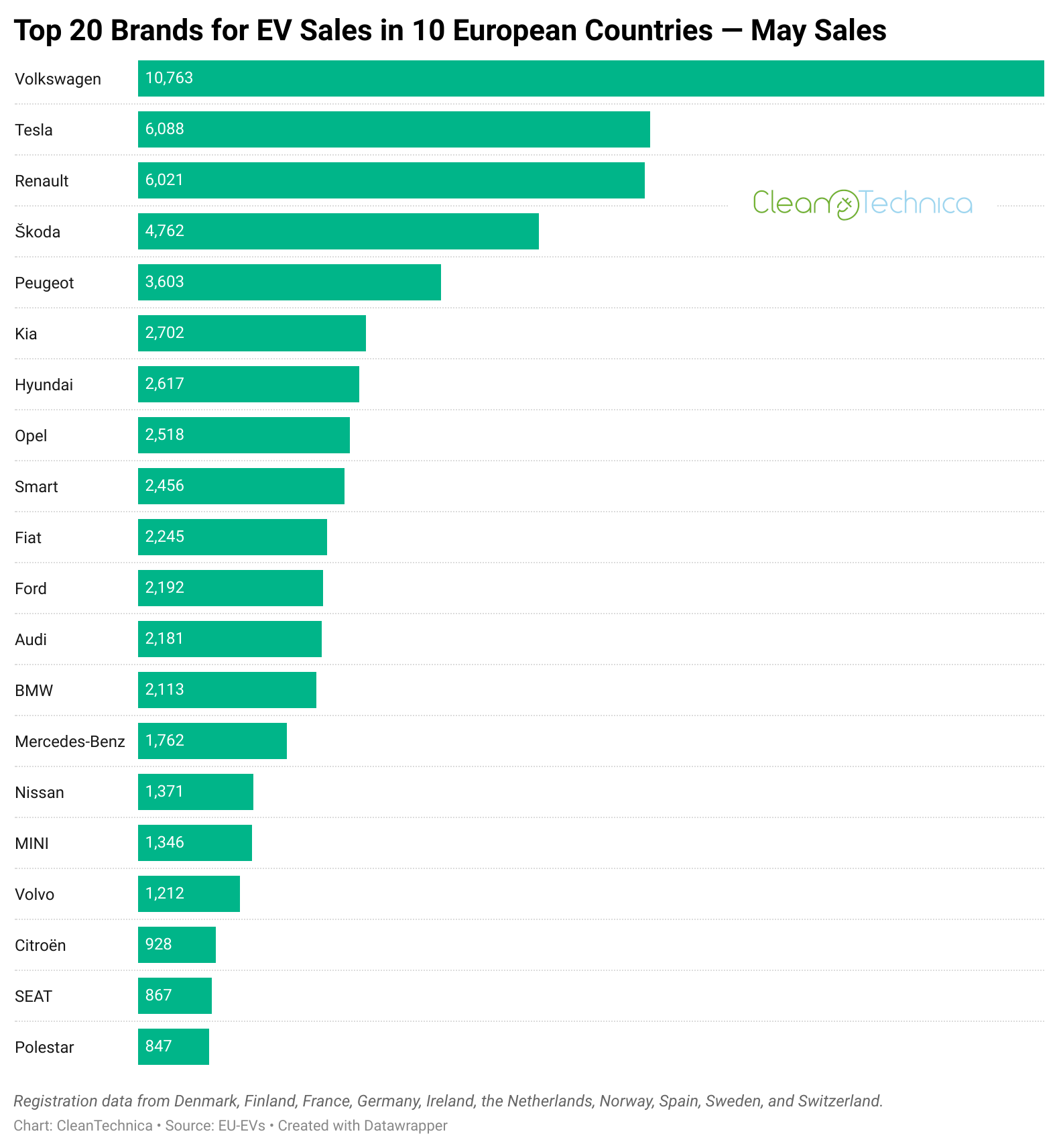 When you look at May EV sales alone, not much changes compared to the January–May sales rankings. However, Škoda jumps from #10 to #4 on the back of the highly popular Škoda Enyaq. Also, Kia and Hyundai, which are very tight, switch places. Additionally, Opel climbs from #9 to #8, Smart drops from #7 to #9, and Fiat climbs from #12 to #10 to close out the top 10.

Overall, it seems likely that Volkswagen ends the year at #1, Tesla at #2, and Renault at #3 — but we’ll see and be sure to report back if any other brands make a sprint for a medal position.

Clearly, Volkswagen Group is king of European electric vehicle sales at the moment. And one has to wonder how long it will be until it is dethroned. It could be a long, long time.

Will Tesla Giga Berlin be able to put Tesla back on top once it is pumping out German-made electric cars? We’ll see, but that’s still a ways off. In the meantime, if a European is buying an electric vehicle, she or he is most likely buying something from the Volkswagen stable.

Some big props are also due for Stellantis, which has quickly climbed the EV sales ladder to #2. I recall when Maarten Vinkhuyzen was predicting big things from PSA (the core of Stellantis) a couple of years ago and being a bit skeptical, yet open minded because it was coming from Maarten (who I trust as much as anyone when it comes to market commentary and analysis). Indeed, he was right, PSA has come on strong. Additionally, Fiat woke up and has been delivering quite a few units of its cute little 500e.

There is actually one way Volkswagen Group could be dethroned overnight — if Tesla joined Stellantis. Teslantis? (Of course, that is just a joke, as it is not even remotely possible.)

The Renault-Nissan-Mitsubishi Alliance and the Hyundai-Kia partnership continue their steady second tier of EV sales semi-leadership, followed for now by the premium-class trio of Tesla, Daimler, and BMW. Tesla is sure to jump in the rankings for the first half of the year, though, when June sales come in. This is, after all, one of its 4 peak sales months of the year, due to Tesla’s shipping patterns always favoring the last month of the quarter.

Any other thoughts on these EV sales rankings and expectations for the future?

How to Succeed With the Help of the … END_OF_DOCUMENT_TOKEN_TO_BE_REPLACED

A traffic light is seen near the … END_OF_DOCUMENT_TOKEN_TO_BE_REPLACED