There are several new entrants in the electric vehicle manufacturing space, and figuring out which one of these will succeed in the long run can be quite challenging. EV start-ups that plan to begin production a year or two from now could be particularly risky investments, because there will be quite a few suppliers of electric vehicles by the time these companies enter the market. By comparison, early movers may have more time to establish themselves.

One such company is Nio (NYSE:NIO). Let’s take a closer look at how Nio may fare in the long-term.

Founded in 2014, Nio sold 24,439 vehicles in the third quarter. That represents 100.2% growth over the company’s year-ago quarter deliveries. In the last two years, Nio has grown its quarterly revenue at an average rate of nearly 137%.

In September, Nio delivered 10,628 vehicles, up 125.7% year-over-year, despite ongoing supply chain constraints. Its 2020 annual revenue and deliveries more than doubled compared to 2019. 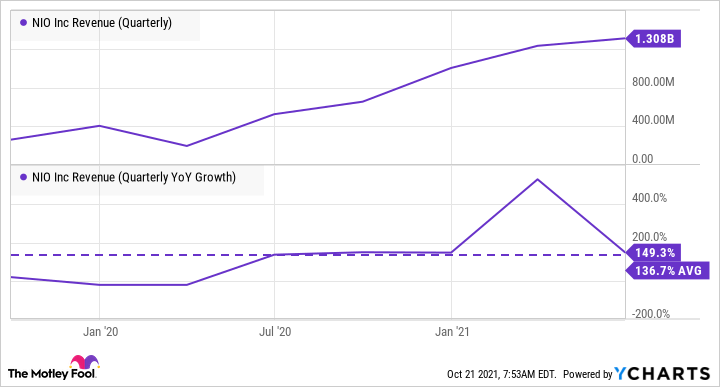 Nio does not provide a long-term expected growth target, but Nio should be in a good position five years from now, even if the growth rate falls a bit from its historical levels. Wall Street analysts expect the company’s sales to grow to $13.6 billion in 2024, up from $2.3 billion in 2020.

Electric vehicles are expected to see robust demand growth in the coming years. Supportive governmental policies, falling EV production costs, improved performance, and the development of charging infrastructure are some of the factors supporting the growth of electric vehicles. And while electric vehicles are witnessing higher demand globally, China leads in terms of growth. 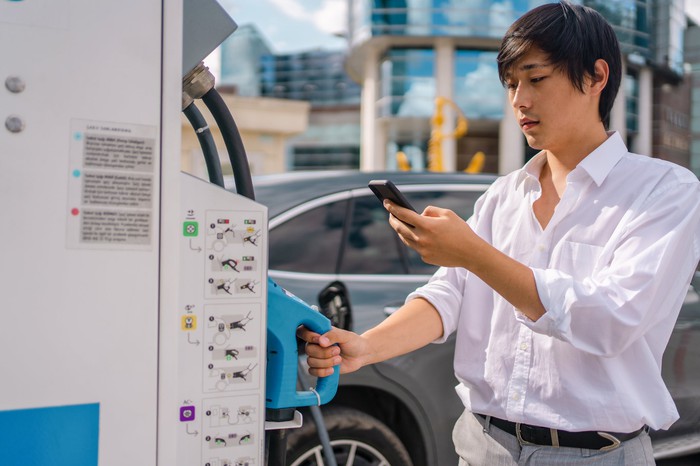 China’s EV sales in the first half of 2021 represented 42% of the global EV sales in that period. So Nio could benefit from strong demand for EVs in its domestic market.

After China, the fastest-growing market for EVs is Europe. Roughly 1 million EVs were sold in Europe in the first half of this year. Nio is eyeing that market too. Norway leads in the adoption of electric vehicles, and roughly 80% of new car sales in the country are EVs. Nio completed the delivery of its first batch in Norway in September. Over time, the company plans to enter other European markets as well.

Though Nio’s revenue growth has been impressive so far, the company faces stiff competition from other players. In China, a joint venture between SAIC Motor, General Motors, and Liuzhou Wuling Motors controls the highest share of the electric vehicles (including hybrids) market. Another key competitor is large traditional automaker BYD, which is expanding into the EV segment.

Smaller players, including XPeng (NYSE:XPEV) and Li Auto (NASDAQ:LI), also offer some serious competition. XPeng reported much stronger revenue growth than Nio in the last four quarters, though from a much lower base. 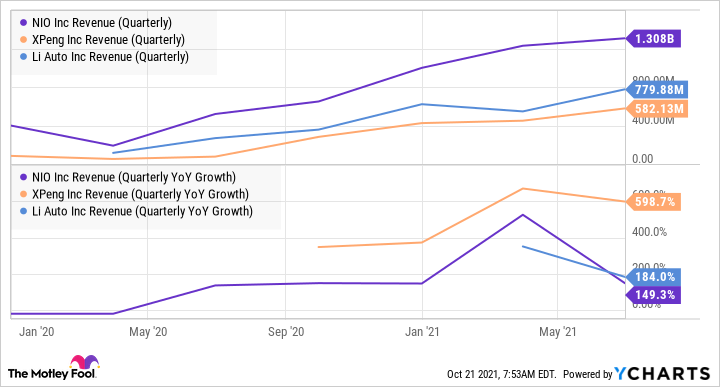 In short, despite strong expected demand growth for EVs in the coming years, the road for Nio’s growth won’t be easy.

Despite competition, Nio has fared well so far. As more and more automakers launch their EV models, competition in the segment will heat up further. But Nio is taking several steps to continue growing in the long-term. Its Battery-as-a-Service model, for example, allows customers to buy a car without a battery and subscribe for battery packs later.

Another way in which Nio plans to expand its addressable market is by developing low-priced models for price-sensitive customers. Strong demand, solid growth strategies, and the company’s plans to expand in the European market should help drive Nio’s growth in the next five years, and beyond.

A traffic light is seen near the … END_OF_DOCUMENT_TOKEN_TO_BE_REPLACED