Shares of quite a few electric vehicle and self-driving-related stocks, including some high-flying names, were trading lower on Thursday afternoon on growing economic concerns in the United States.

Here’s where things stood as of 2:30 p.m. EST for these companies’ stocks, relative to their closing prices on Wednesday.

None of these companies’ stocks were moving lower on company-related news, as there wasn’t any aside from a minor announcement from Lucid Motors. What appears to be going on is a so-called “risk-off” movement in the broader market, driven by a few separate, but related, concerns.

First, the $1.9 trillion COVID-19 relief bill is moving through the U.S. Congress. Some investors are concerned that the huge amount of money could trigger inflation, which has been low for a long time. Rising inflation is bearish for high-growth stocks, which include all of the names here.

Second, the rate on the benchmark 10-year U.S. Treasury bond has been rising, hitting 1.5% earlier today — its highest mark in over a year. 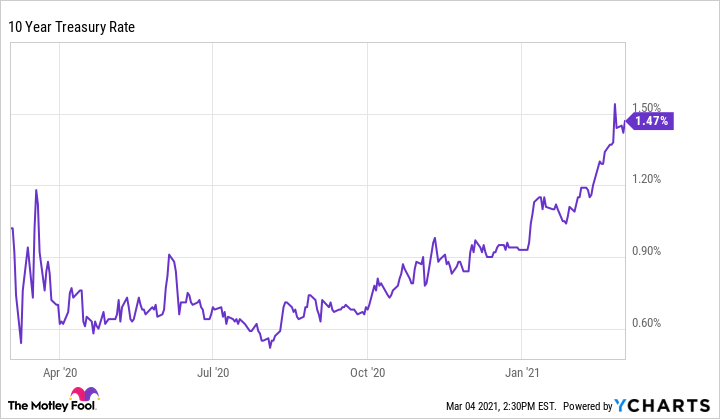 While it’s still low by historical standards, rising rates mean that it could cost companies more to borrow money in the future. For companies like those here, all of which are some distance from profitability, that’s bearish.

There’s one more factor that might be contributing to today’s sell-off. Tesla (NASDAQ:TSLA), the leader of the electric vehicle category, has been trading lower on a number of concerns. Some are unique to Tesla, but it’s likely feeling the macroeconomic pressure as well. And given that many of the electric vehicle stocks traded up on hopes that they might follow in Tesla’s high-flying footsteps, it’s no surprise to see them trading down as Tesla sinks.

In a video from REE Automotive, a … END_OF_DOCUMENT_TOKEN_TO_BE_REPLACED

The iPhone 12 got a fresh new … END_OF_DOCUMENT_TOKEN_TO_BE_REPLACED