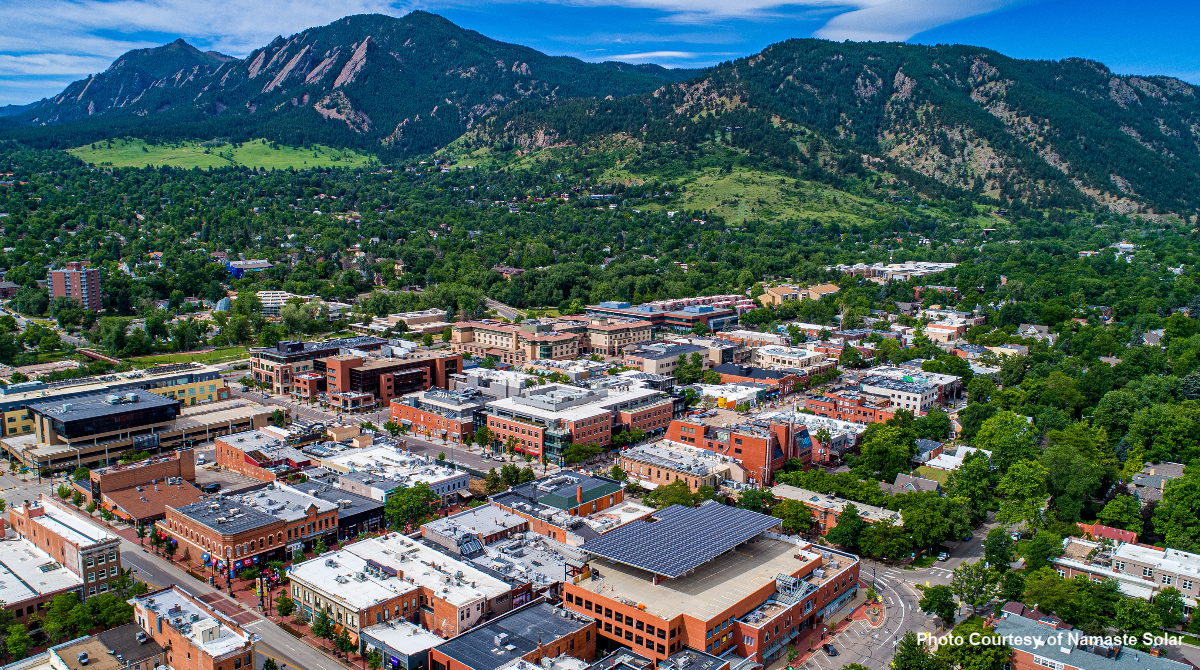 City’s Generation Solar project to save taxpayers an estimated $1.5 million by 2050

The City of Boulder, in a unique partnership with Unico Solar and Madison Energy Investments, is now home to 2.1 MW of rooftop and ground-installed solar, marking the completion of the city’s Generation Solar project. This is enough to power more than 400 average American homes each year.Solar was installed on 11 city-owned sites, including parking garages, fire stations and land adjacent to the city’s Water Resource Recovery Center.

Under agreements with the City of Boulder, which requires no up-front capital or ongoing maintenance costs for the city, Madison Energy Investments and Unico Solar leased nearly 363,000 square feet of city-owned rooftop and ground area at sites across the city. The entire portfolio is expected to generate more than 80 million kWh over 20 years and demonstrates progress toward the City of Boulder’s goals to operate on 100% renewable energy by 2030. The City of Boulder purchases the solar power produced by the installations through separate purchase agreements, allowing for greater control and flexibility for the municipal buildings that use the power. The project is expected to generate an estimated $1.5 million in cumulative savings for Boulder over 30 years. The agreements will increase the city’s total solar portfolio to 6.45 MW.

“We take climate change very seriously in Boulder, which is why our City Council declared it an emergency in 2019. In addition to fighting climate change, projects like this one also demonstrate the value of local generation, which can boost our local economy and reduce costs to taxpayers,” said Yael Gichon, Energy Project Manager at the City of Boulder. “It’s a win on all fronts.”

“As a real estate investor with a long history of leadership in sustainability, Unico is uniquely aware of the impact commercial buildings have on climate change, and municipal buildings in particular are uniquely situated to help scale the use of solar as cities seek to advance their renewable energy goals,” said Adam Knoff, director and co-founder of Unico Solar. “We’re proud to announce the completion of this years-long effort with the City of Boulder to further their commitment as a renewable energy leader. The city’s dedication to local renewable energy as a way to meet their climate goals also allows them to take part in the monetary benefits of incorporating solar energy into the grid.”

Madison Energy Investments is a platform that develops, constructs, owns and operates distributed generation assets within the commercial and industrial (C&I) and small utility-scale sectors. The team’s diverse experience has produced best practices across all phases of the industry from origination to asset management. Quality partnerships and the ‘execution mindset’ drive us to be the best team in the industry. To date, MEI has over 200 MW under contract across 17 states. To learn more about Madison Energy Investments, please visit madisonei.com.

Since 2005, Namasté Solar has developed, designed, installed, and maintained solar electric systems for homeowners, commercial property owners, and utility-scale developers. Namasté Solar, an employee-owned Colorado Public Benefit Corporation and Certified B Corporation, also provides highly specialized solar engineering, design, and consulting services, as well as maintenance and operations for solar projects across the United States. The company is on a mission to accelerate the adoption of clean renewable energy and to prove there is a better way to do business. As a B Corp, Namaste Solar is part of a global movement using business as a force for good to solve social and environmental challenges. The company has installed more than 8,100 clean energy systems that produce over 103 megawatts combined. For more information visit: namastesolar.com

Your browser does not support the … END_OF_DOCUMENT_TOKEN_TO_BE_REPLACED