The Future of Solar-Powered Profits Isn’t in Solar

This two-week old blaze continues to churn through the mountains just a few miles southwest of the Tahoe Basin.

So far this year, more than 6,800 fires have been recorded in California, destroying 1.63 million acres and 2,000 buildings in the process.

This takes me back to the California fires from a couple of years ago.

During the massive Kincade Fire – the biggest California wildfire in 2019 and the largest ever in Sonoma County – PG&E Co. shut the lights off on more than one million customers. In fact, I still remember them shutting off the power at my house in Northern California on October 27, 2019.

So far this year Californians have avoided the rolling blackouts – in which our utilities cut off power to millions of customers in order to avoid even more damaging fires – that plagued us the past two years.

Other parts of the country haven’t been so “lucky.”

In February, nearly five million Texans lost power during the harsh winter storm that hit their state. And on Sunday, as the Caldor Fire blazed near my neck of the woods, more than one million folks in Louisiana and Mississippi lost power after Hurricane Ida hit – and many of them don’t expect to get it back for a week or more.

While for most of us power outages are a temporary annoyance, week-long blackouts can be nearly devastating. And for parents with young children, the elderly, and those who depend on power to treat medical conditions, they can reach critical status quickly.

No wonder my wife’s cousin, Pete, is so busy.

In addition to his full-time job as an electrician for the City of Santa Rosa, Pete spends his off-hours installing backup generators for Northern Californians sick of losing their power during wildfire season.

Pete tells me he installs four to five of them a week… and more and more all the time. In fact, he makes some nice extra income through this “side hustle.”

Generator sales went through the roof following the Texas storm – and they’re doing so now again in the wake of Ida.

However, backup generators are not a long-term solution to California’s blackouts and our shaky national power grid. They’re expensive, dirty, wasteful, and prone to performance problems.

However, a new technology now available to homeowners is a likely solution.

It’s pricey, too, but it’s clean and efficient.

You can use it all year long – not just during emergencies.

And it’s leading many investors to triple-digit gains…

Until recently, residential solar power systems lacked the ability to store energy; they were simply use-it-or-lose-it power generators. Energy storage technologies (aka “batteries”) were too expensive to be viable additions to solar-power systems.

But this old story is changing rapidly. Solar-plus-storage has arrived.

Globally, the deployment of battery-based energy storage solutions (BESS) is ramping up quickly. According to JPMorgan, the cumulative installed base of BESS will soar 100-fold between now and 2030.

Utilities and commercial customers (like office parks and big-box stores) were the first to embrace solar-plus-storage.

And now, the blackouts in California and other fire-prone regions are ratcheting up demand for home-based solar-plus-storage systems.

Bloomberg New Energy Finance expects this segment of the solar energy market to grow about 25% a year over the next several years – or more than twice as fast as the utility-scale solar sector.

And now, just in time, several solar companies are there to meet homeowners’ needs…

For example, Enphase Energy Inc. (ENPH), an innovative and leading provider of “modular microinverters” for the solar sector, started rolling out its “Ensemble” energy storage solution for home use on November 20. In the simplest terms, this system is a battery linked to solar panels. 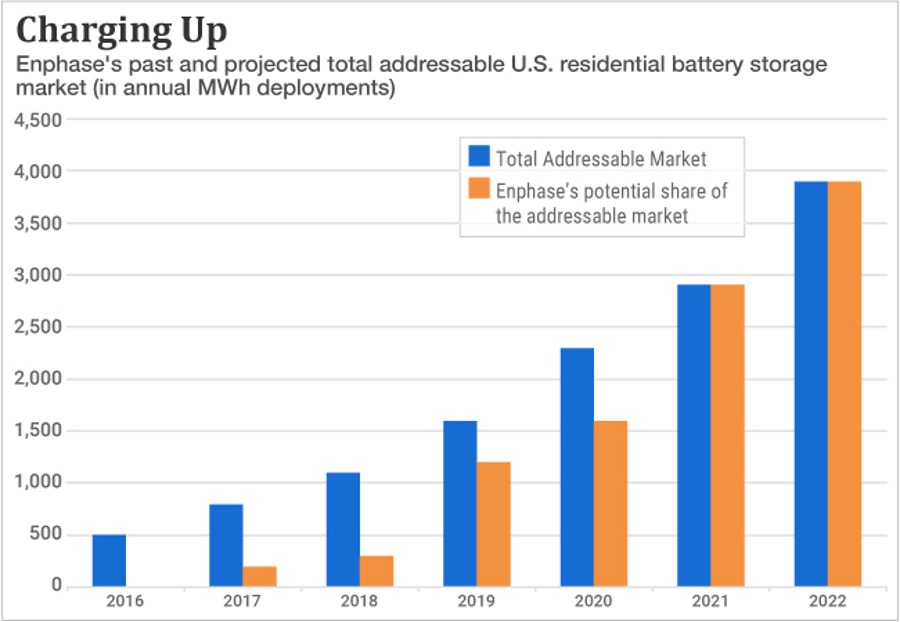 The Ensemble storage system integrates with the new Enphase IQ8 microinverters to create an “always on” power system. It provides real-time energy management that enables homes to “choose” between using their own solar/stored power or power from the grid, based on pricing and availability.

Importantly, for places like California and the Gulf Coast where blackouts are becoming the new normal, the Ensemble system and others like it can operate independently of the grid and provide power even when the grid is “offline.”

These systems are expensive – after tax credits, around $15,000 to $20,000 for solar-plus-storage, according to the California Solar & Storage Association. Still, Enphase says its Ensemble system “keeps homes powered when the grid goes down” and saves homeowners money “when the grid is up.”

That’s why so many of we Californians – and Texans and Gulf Coasters, too, now – are planning to install solar-plus-storage systems in their homes.

A Metal Revolution, Too

This Second Electric Revolution is powering ahead… and it is creating spectacular opportunities everywhere it goes. But finding the best ways to invest in this revolution is no easy task.

Solar stocks reached bubble territory in late 2020 and early 2021 – and they haven’t receded enough to put them in my crosshairs yet.

Moreover, many leading companies in the EV and energy storage sectors are losing money. The Chinese EV company Nio Inc. (NIO) is one high-profile example, but it’s hardly alone.

Therefore, rather than invest in money losers or bubble stocks, I have recommended “pick and shovel” plays that provide essential ingredients to the solar, EV, and energy storage industries.

EV and energy storage technologies — a major part of the “Technochasm” we talk about here — require vast amounts of metals like lithium, copper, nickel, and manganese. The average battery-electric vehicle, for example, contains about 180 pounds of copper — that’s about half as much as the average American home.

So, the boom in EVs and energy storage is creating major “echo booms” in several metal markets.

To capitalize on these prospective booms, I’ve recommended battery metals plays, like Freeport-McMoRan Inc. (FCX), which mines copper and other metals used in battery production. Already this year, readers of my Fry’s Investment Report service had the chance to book 150% gains on one-third of their Freeport position.

I’m always looking for more plays with Freeport’s sort of potential in Fry’s Investment Report. In fact, I have my latest picks ready to go for you.

A traffic light is seen near the … END_OF_DOCUMENT_TOKEN_TO_BE_REPLACED