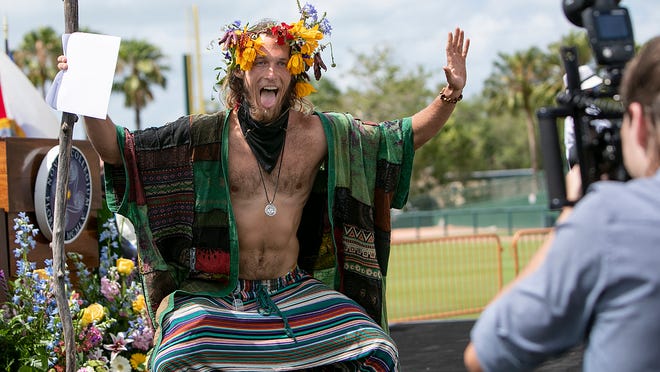 Living sustainably isn’t a lifestyle most people inherit, but for an incoming fourth-year student at New College in Sarasota, the path to sustainable living was set in stone before she was born.

Antonia “Toni” Ginsberg-Klemmt, 20, won this year’s OZY Genius Award for her invention called GismoPower – a mobile solar-powered carport with an integrated electric vehicle charger. She was chosen out of thousands of applicants for the prestigious honor plus a $10,000 cash prize.

Ginsberg-Klemmt’s passion for renewable energy didn’t start in college; she was raised to value sustainable living. Her parents lived on a sailboat for years to reduce their carbon footprint and instilled those ideals in their daughter and her siblings.

“We lived on a sailboat for many years,” said Ginsberg-Klemmt’s mother, Erika. “I would say we really started going solar around 1995, that’s when we brought our first panels on board in Puerto Rico, and it was amazing. You don’t have to turn on a motor every time you turned on a light switch or a radio, or anything else you’d need power for. That was an exciting and exhilarating time.”

Graduations:Sarasota-Manatee ceremonies a mix of in-person, virtual and drive-thru

Erika says living on a sailboat makes you highly sensitized to the energy you use on land and on the boat. It made her and her husband aware of different ways to create energy – like using solar.

Eventually, the married couple left their boat life and found a home in Florida. Their passion for renewable energy didn’t diminish as they installed solar panels on their home. Ginsberg-Klemmt’s father, Achim, was behind that. He used his electrical engineering degree to make such an energy-efficient home that Florida Power and Light issues them refunds because their household produces more energy than it uses.

Having two sustainability-minded parents shaped Ginsberg-Klemmt. But she said physics wasn’t always her dream. Early in childhood, she was more of an artsy girl. That was until she took her first physics class at Pine View School.

“I used to tell myself there’s no way my brain has the capacity to understand these smart things that my smart dad knows,” she said. “So I was convincing myself that there’s no way I would ever get into that field. But then once I did start to understand and realized, ‘Oh wow, I am capable of processing this information,’ that was when I went to my dad.”

During her third year at New College, Ginsberg-Klemmt took on the challenge to create a portable, solar-powered carport as her independent study project for class. The idea came when she noticed there were electric car charging stations on campus near administrative buildings but none near residential halls where she lived. She said she’d have to make a seven-minute walk to her car from her dorm room.

“When I did live on campus I would basically have to make the journey from the basement campus because we only have charging stations in front of the Heiser Complex and there are no charging stations on the residential side, which is the opposite side of (U.S.) 41,” said Ginsberg-Klemmt.

She and her dad started GismoPower in August 2020, but she decided to finish it for her independent study project after her encounters on campus. It took about six months to make, with a lot of trial and error, but she says she is ecstatic over the results.

GismoPower stands for Garage Interior Storable MOdular Photovoltaic On Wheels With Integrated EV Charger Rack. It’s a portable charger that can be wheeled in and out of a garage in case of hurricanes – which Florida knows all too well.

“Interestingly enough, solar panel carports are very common in California, which doesn’t make sense to me why they aren’t more common in the Sunshine State,” said Ginsberg-Klemmt. “Hence me trying to make this initiative saying, ‘hey this is something that needs to become big and the status quo.’”

After learning she had won an OZY Genius Award and the prize money, Ginsberg-Klemmt started planning. She says the entire $10,000 prize is going toward materials to make a new and improved GismoPower that will eventually be installed at New College.

GismoPower is still in its early stages of design and Ginsberg-Klemmt knows she has a lot of work ahead of her but she’s ready for the challenge.

“My hope is that through this physics degree and through what I end up pursuing later on in grad school that it’ll create a huge difference in helping the environment and not only us but our future,” she said.

A traffic light is seen near the … END_OF_DOCUMENT_TOKEN_TO_BE_REPLACED