The new imaging system reveals defects in solar panels even in bright sunlight.

Researchers have developed and demonstrated a new system that can detect defects in silicon solar panels under full and partial sunlight under all weather conditions. Current defect detection methods cannot be used in daytime conditions, so new systems can make it much easier to maintain optimal operation of solar panels.

Silicon solar panels, which make up about 90% of the world’s solar panels, often have defects that occur during manufacturing, handling, or installation. These defects can significantly reduce the efficiency of solar panels, so it is important to detect them quickly and easily. 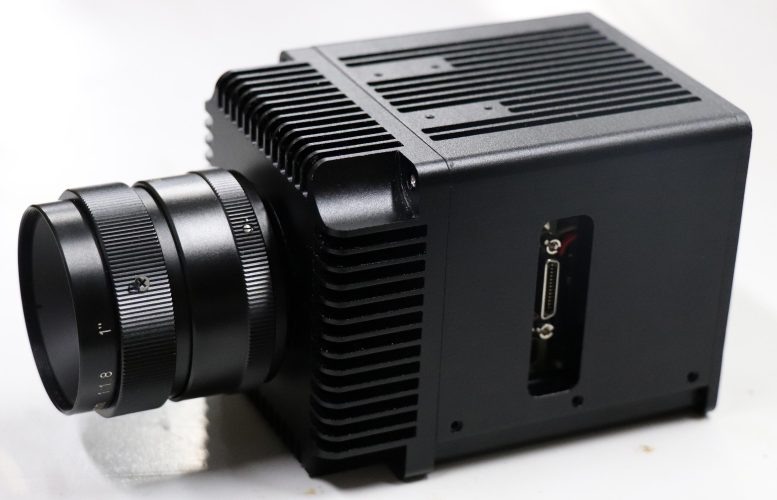 Researchers used a very high frame rate InGaAs detector to capture a series of images of the solar panel when a modulated current was applied. The very fast imaging speed obtained from this detector allowed us to distinguish more changes between the images in the sequence. Credit: Nanjing University of Science and Technology Yunsheng Qian

“Today’s defect detection systems can only be used to find defects in solar panel modules that have been removed and moved to a shaded environment at night,” said Yunsheng Qian, who led the research team. “We hope that this system will allow solar power plant inspectors to identify defects and identify them more quickly so that these systems can generate the highest levels of power. “

See through the light

In a new study, researchers have created an all-weather imaging system that works in all lighting conditions. To visualize defects, they have developed software that applies modulated current to solar panels. This causes the solar panel to emit light that turns on and off very quickly. A very high frame rate InGaAs detector is used to capture a series of images of a solar panel while passing current. Researchers also added a filter to limit the detected wavelengths to around 1150 nm to remove some of the stray light from the image. 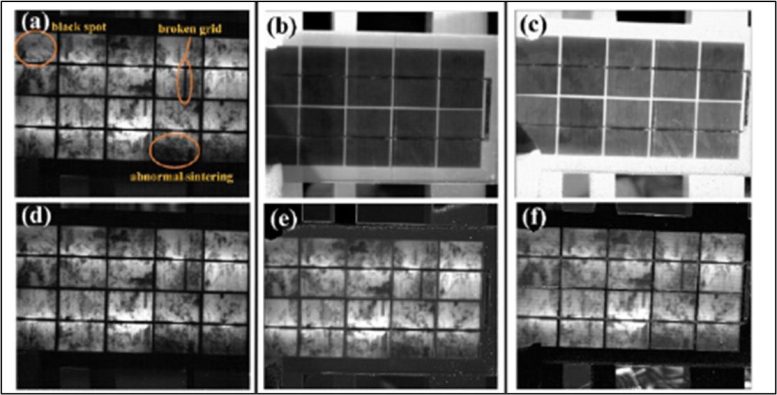 Researchers have developed a new system that can detect defects in silicon solar panels under full and partial sunlight. Shown are images taken under low (left), medium (middle), and high (right) solar irradiances. The upper row (a, b, c) was obtained using a traditional system that does not work in sunlight, and the lower row (d, e, f) was obtained using a new system and defect display algorithm. Credit: Nanjing University of Science and Technology Yunsheng Qian

“The very fast imaging speed allows us to collect more images, so we can distinguish more changes between images,” said Sheng Wu, the lead author of this article. “A key development was a new algorithm that distinguishes between modulated and unmodulated parts of an image sequence and magnifies this difference. This allows for clear imaging of solar panel defects in high irradiance. I can do it.”

To test the system, researchers applied it to both single-crystal and polycrystalline silicon solar panels. The results show that the system can detect defects in silicon-based solar panels at irradiances of 0 to 1300 watts / square meter. This corresponds to light conditions ranging from full darkness to full sunlight.

Researchers are currently working on software that reduces digital noise to further improve image quality and allow detectors to more accurately capture image changes. We also want to apply artificial intelligence to the captured images to automatically identify the type of defect and see if the inspection process can be further streamlined.

CSCI; Are you looking for managed … END_OF_DOCUMENT_TOKEN_TO_BE_REPLACED

Businesses must have reliable IT … END_OF_DOCUMENT_TOKEN_TO_BE_REPLACED