Members of the Puyuma people yesterday urged the Taitung County Government to scrap plans for a solar power plant on a 161 hectare plot of land near the estuary of the Jhihben River (知本溪).

The land was, in 2018 when the county government was discussing the project, mostly traditional Aboriginal land, Chen said. 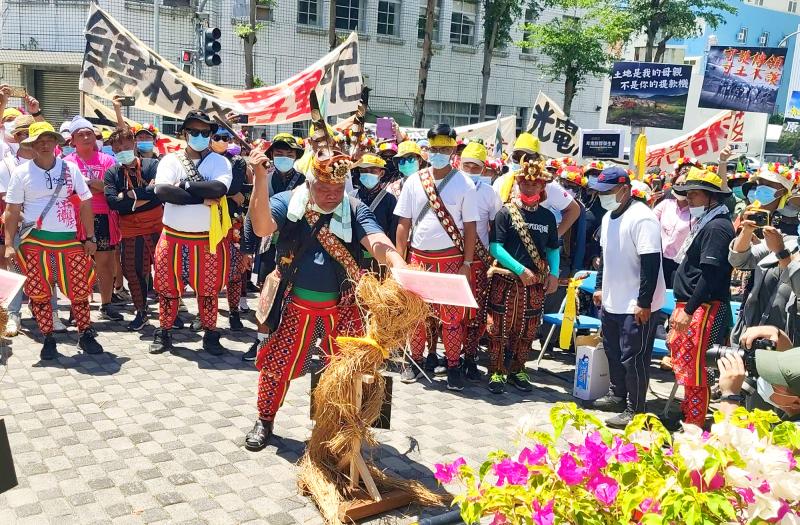 Chen said that the questions in a vote held on June 1, 2019, soliciting the opinions of Aborigines were poorly designed.

However, those opposed to the project have questioned the validity of the vote, saying that many people voted on behalf of those not present.

Members of the Mafaliu, Pakaruku and Ruvaniaw branches of the Katatipul community yesterday protested in front of the Taichung County Government building, demanding that the county government respect traditional Aboriginal land and cancel the project.

Aborigines were never consulted about the contract for the project, as it was handled by the county government and the contractor, demonstrating an utter lack of respect for local Aborigines, Chen said.

The county government has also handed the contractor powers that, by law, only Aborigines have the right to exercise, he said.

Over the past three years, local Aborigines have voiced their opposition to the project many times, but the county government has not only ignored their opinions, but has also facilitated the contractor’s efforts to persuade villagers to agree to the project, representatives of the Katatipul community said.

The protesters said that if they did not take a stand and voice their discontent, their autonomy, opinions and rights would be ignored by the county government.

In response, the county government said that it remains committed to the solar power plant, but that it respects the opinions of the local Aborigines and would ensure that the project proceeds according to the law.

Comments will be moderated. Keep comments relevant to the article. Remarks containing abusive and obscene language, personal attacks of any kind or promotion will be removed and the user banned. Final decision will be at the discretion of the Taipei Times.

A traffic light is seen near the … END_OF_DOCUMENT_TOKEN_TO_BE_REPLACED