Subic Bay Freeport— With the increasing cost of electricity needed to sustain office operations and deliver public services, the Subic Bay Metropolitan Authority (SBMA) is now shifting to renewable energy to save on power cost and help promote sustainable development. 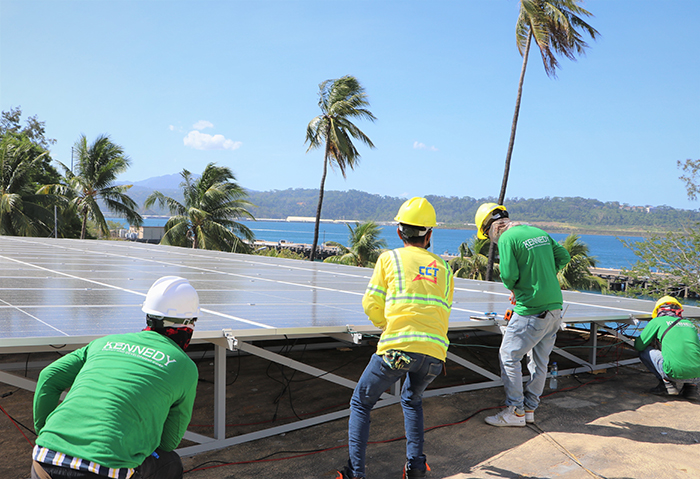 SBMA Chairman and Administrator Wilma Eisma said Building 229 and Building 255, which are two main office buildings of the agency, are now being equipped with Grid-Tied Solar Power System that would generate savings from electric consumption of from 12 to 39 percent.

“SBMA is going green—which is not only good for the environment, but is even economically inevitable because that’s the way things are shaping up. You either shift to renewables, or become inefficient and less competitive,” Eisma said.

“After installing the solar systems at 229 and 255, we will schedule six other SBMA facilities, including the Remy Field sports complex, for similar solar system upgrades,” she added.

The Subic agency proceeded with the green innovation after a pilot project at the SBMA Regulatory Building that ran successfully two years ago.

The new project at Buildings 229 and 255 will produce about 90 kilowatts-peak (kWp), which is the rate at which a photovoltaic or solar power system can generate energy at peak performance.

Eisma said the project contractor, Kennedy Energy and Development Corp., has just finished tapping the array of photovoltaic sources on top of the two buildings to existing main distribution panels.

“With these solar power sources, we expect not only to save on electricity billings, but also to sell some of the excess power that we can export back to the grid,” she said.

According to Engr. Tony Rafanan of the SBMA Telecommunications Department, which is in charge of the project, said the installation of solar power systems would cost an average of P6 million per building, and in the case of Remy Field may reach P19 million.

However, each building installed with the solar power system will be able to generate savings ranging from P60,000 to P120,000 a month, depending on the generated power of the system, he said.

“The higher the generated power would be, the bigger the savings,” he added.

Rafanan explained that the Grid-Tied Solar Power System drastically reduces electricity bills, and during weekends will sell excess energy back to the grid via net metering.

Meanwhile, the system will automatically prioritize the use of the solar system as a power source. The use of the grid will be at a minimum level, he added.

COMMENT DISCLAIMER: Reader comments posted on this Web site are not in any way endorsed by Manila Standard. Comments are views by manilastandard.net readers who exercise their right to free expression and they do not necessarily represent or reflect the position or viewpoint of manilastandard.net. While reserving this publication’s right to delete comments that are deemed offensive, indecent or inconsistent with Manila Standard editorial standards, Manila Standard may not be held liable for any false information posted by readers in this comments section.

June 16 (Reuters) - Britain is in … END_OF_DOCUMENT_TOKEN_TO_BE_REPLACED