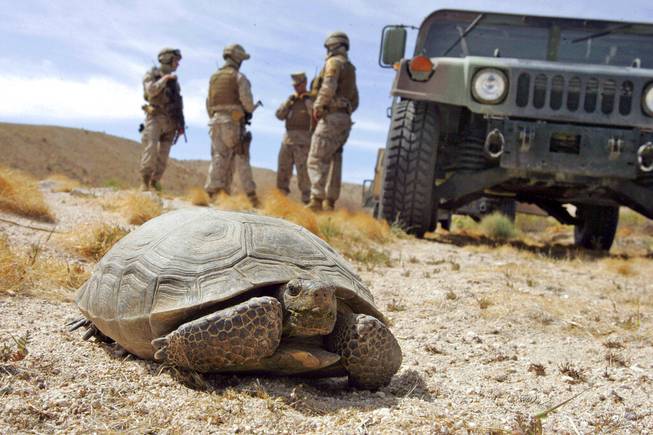 In this April 4, 2008, photo, Marines wait for a desert tortoise, endangered and protected by federal law from harm or harassment, to move off the road at the U.S. Marine Corps’ Air Ground Combat Center at Twentynine Palms, Calif.

When 139 desert tortoises were moved across a rural Nevada road to make way for the Yellow Pine Solar project in rural Nevada, it might not have seemed like a cause for concern. The animals weren’t going far, after all.

But what happened next at the 3,000-acre site south of Pahrump showed why relocating animals in the desert can be tricky — and risky for the wildlife involved. Thirty of the tortoises were killed in a five-week period, apparently by badgers. That amounted to about a third of the adult tortoises, a worrisome loss for a threatened species.

Why this happened is a mystery, as badgers usually don’t eat tortoises. But conservationists speculate that the extreme drought might have reduced populations of animals that badgers normally prey on, and that the tortoises’ unfamiliarity with their new habitat left them less able to protect themselves.

This certainly seems plausible. Animal experts say studies have shown other instances of drought forcing predators to change their diets — for example, coyotes also have been known to eat desert tortoises, which generally aren’t on their menu, after die-offs of rabbits, rodents and other prey animals.

Meanwhile, even though the tortoises were moved a short distance, this was new territory for them. The slow-moving animals don’t have a huge range, so they wouldn’t have known where to find burrows and other shelters in the new territory in which to escape threats.

While more study is forthcoming, and while numerous groups in the public and private sector are working to protect the desert tortoise, the situation at Yellow Pine underscores the environmental dangers of large-scale solar development in wildland areas.

We like both tortoises and solar power, and we believe there are ways to develop solar arrays that exist in harmony with desert wildlife. One way is to build them in areas that have already been developed — abandoned mines, rooftops, etc.

Meanwhile, why not also think big, and redesign large-scale solar development in a wildlife-friendly manner? Most arrays are built very close to the ground and in densely packed configurations. Raise the panels off the ground and redesign the arrays with corridors between them, and the impact for wildlife is reduced.

For now, the drawback for construction in developed areas is that property in urban areas is generally more expensive than rural land and many old mining sites aren’t near transmission lines.

This begs for Nevada decision-makers to constantly keep an eye open for opportunities to incentivize solar generation on developed property, expand the transmission grid to reach developed properties and be creative in finding ways to limit the environmental impact of development that does occur on wildlands.

No question, Nevada must boost our solar capacity. In a place where the sun shines most days of the year, we’re sitting on a 21st century gold mine in the form of our potential to become a global leader in solar generation.

And as we can see from the wildfires, intense drought and the growing bathtub ring at Lake Mead, proliferation of clean energy is critically needed to address climate change.

But to paraphrase an old statement about war, we can’t destroy the environment in order to save it. We can’t sacrifice the desert tortoise, or any other organism whose survival is critical to maintaining the balance of life in the desert, in the name of clean energy.

The Yellow Pine situation shows just how delicate that balance can be. State leaders should take heed and strive for solutions that keep wildlife safe and let us reach our solar potential.

How to Succeed With the Help of the … END_OF_DOCUMENT_TOKEN_TO_BE_REPLACED

A traffic light is seen near the … END_OF_DOCUMENT_TOKEN_TO_BE_REPLACED