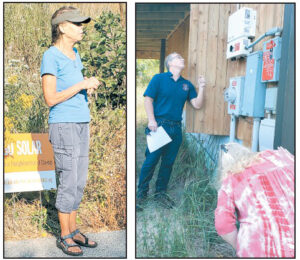 Left: Porter homeowner Susan Brandstetter talks about her recently added solar power array to visitors at a Sept. 14 open house sponsored by a newly launched area co-op through Solar United Neighbors, a nonprofit organization; Right: Jerry Jackson of LaPorte County and Vicki Rudolph of Michigan City look over the metering system at Susan Brandstetter’s home in Porter. They were some of the people who turned out for an open house for a recently installed solar power system. LOIS TOMASZEWSKI/photos

Utility bills for a summer in the Duneland area can be costly, but one Porter homeowner is making a dent in her monthly power bill. Susan Brandstetter shared the recent addition of a 29-panel solar array at an open house Sept. 14, as part of a newly launched solar co-op.

“I wanted to do solar for a while,” Brandstetter said. “It’s for a good cause.”

She was one of two homeowners to welcome the community to their homesites to discuss solar power with the help of Dan Robinson, the Northern Indiana field organizer for Solar United Neighbors, which runs the co-op. The second open house was in Michigan City.

“Now is a great time to go solar, with the 26 percent federal tax credit still in place and Indiana’s net metering mechanism being eliminated next summer,” Robinson said, “We’re trying to make it as easy as possible for people to consider purchasing a solar system for their home or small business to take advantage of those financial incentives right now.” 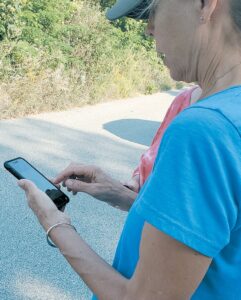 Left: Susan Brandstetter demonstrates an application she uses to track energy use of her devices in her home;

For Brandstetter, the solar power addition to her home utilities cut her August electric bill in half. The savings could have been more, but a medical need for summer air conditioning and a home with windows facing west means she uses more power during the summer.

Her solar system was hooked up to the NIPSCO grid in mid-July. The 10,000-kilowatt system provides electricity for her home and any extra energy is passed to the local power grid. That extra power generation comes back to her as a credit on her bill, explained Robinson. This is the metering component of solar power that will end for homeowners in June.

Brandstetter answered questions from the half-dozen visitors to her house overlooking Lake Michigan. She was drawn to the idea of solar power because of her concern about the environmental impact her house and lifestyle had.

“I don’t know who would not want this,” said Vicki Rudolph of Michigan City. She is considering adding solar to her house. 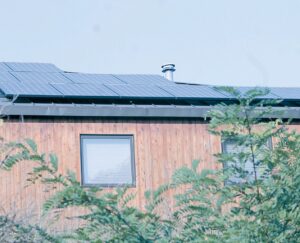 Right: Some of the 29-panel solar array are attached to the eastward facing roof of this Porter house. Other panels are installed on the opposite side. LOIS TOMASZEWSKI/photos

Jerry Jackson, who works for LaPorte County, attended the open house. The wastewater plant in LaPorte County has a solar array, Jackson said. “I would like to encourage more people to add solar their homes,” he said.

Solar is still expensive install, although costs have dropped as new technology develops. The system is paid off in about 10 years, from the reduction in power bills and the credit provided for metering, Robinson said. Batteries to store excess power on site is an add-on, but can ensure that access to power continues, even if the power grid goes out, operating much like a generator.

The co-op made getting solar more affordable by offering competitive bidding and group buying potential to leverage the costs of solar installation, Robinson said. It also offers training for those who are considering solar.

Brandstatter attended classes and is officially the first member of the co-op, Robinson said. The coop for the Duneland area launched a few weeks ago. It is one of several in the state through Solar United Neighbors.

Robinson said one study indicates that Indiana is the fourth fastest growing state for solar energy. Rooftop solar, which is the most common installation for homeowners, is different from the utility scale solar that many utility companies, including NIPSCO are using for their corporate power generating needs.

The Northern Indiana Regional Planning Commission said in a provided statement that Solar United Neighbors’ efforts in the region are supported as part of ongoing implementation of strategies adopted in NIRPC’s “NWI 2050” regional long-range plan. This project supports a strategy to amplify the efforts of local solar energy advocates to increase implementation of solar solutions—a key strategy for cleaner air and energy in Northwest Indiana.

CSCI; Are you looking for managed … END_OF_DOCUMENT_TOKEN_TO_BE_REPLACED

Businesses must have reliable IT … END_OF_DOCUMENT_TOKEN_TO_BE_REPLACED