The Beyond Earth Institute, a nonprofit that offers policy recommendations for human expansion elsewhere, offered the U.S. National Space Council a strategy for space solar power development. The group said the strategy would provide power for both terrestrial commercial applications and lunar operations.

In Beyond Earth’s vision, space solar power systems would include photovoltaics and concentrators, along with wireless power transmission systems, including microwave and laser power transmission. The microwaves or lasers would beam energy from the satellite to a receiver called a rectenna, which could then dispatch power terrestrially or on the moon. 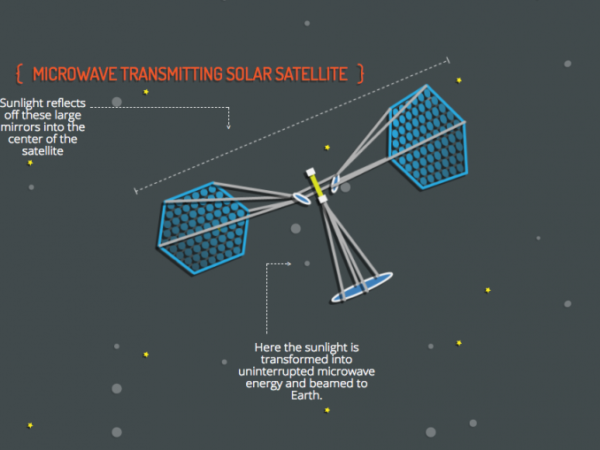 The structures would feature large in-space low-mass systems that are assembled and deployable. The systems would be supported by maintenance robotics and solar-powered propulsion systems.

Beyond Earth said it sees a path for this technology to be operational by the late 2020s, achieving nearly continuous dispatchable power at scales of gigawatts and greater. They said that with public-private collaboration, the terrestrial power supply could be inexpensive and commercially viable. The recommendation offered no cost estimates.

In its strategy, two pilot programs were recommended. One would place a facility on Earth, which could be scaled to gigawatt range, and a 1 MW facility on the permanently shadowed region of the moon. Terrestrial power supply units would operate in low-Earth orbit, and interplanetary transmission would occur high-Earth orbits.

The institute said issues associated with spectrum allocation and management of the wireless power transmission would be resolved by the Federal Communications Commission and through the International Telecommunications Union.

The letter provided a roadmap to achieving this vision.  First, by the mid 2020s, identification and resolution of key technical challenges would be made. A requirements assessment, technology assessment, and development stage would be conducted in collaboration of the Energy Department, NASA, the Department of Defense, and private actors.

Earlier this year, the U.S. Air Force awarded the University of Toledo $12.5 million to develop photovoltaic energy sheets that would harvest solar energy in space to transmit power wirelessly to Earth-based receivers or to satellites.

Researchers will develop flexible solar cell sheets, each roughly the size of a piece of paper, that can be assembled into larger structures.

One space-based solar array could include tens of millions of sheets and be as large as a square mile. An array that size could generate about 800 MW, the researchers said.

In its policy recommendation, Beyond Earth said that by the mid- to late-2020s, spectrum management and other regulatory issues would be resolved. A demonstration of at least 1 kW of power dispatch to Earth would be completed by 2026.

By 2028, Beyond Earth recommends a lunar demonstration of delivery of no less than 100 kW, and construction of a 100 MW terrestrial power system, scalable to 1 GW or above. They said the systems should be in operation for a minimum of five years, and all elements in orbit would eventually be brought back to Earth to be decommissioned.

A traffic light is seen near the … END_OF_DOCUMENT_TOKEN_TO_BE_REPLACED