Apple recently updated its iOS 15 features page to highlight some additional information about the software update ahead of its imminent release. 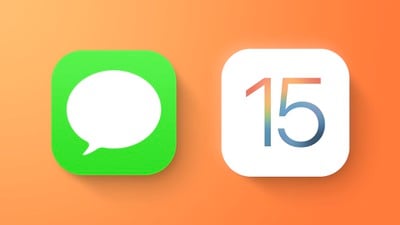 In addition to revealing that Find My network support for AirPods Pro and AirPods Max has been delayed until “later this fall,” Apple said iOS 15 allows users to seamlessly switch between phone numbers in the middle of an iMessage conversation on an iPhone with Dual SIM support, including the iPhone XS, iPhone XS Max, iPhone XR, and newer.

Regional updates to the page include the addition of Japanese in the list of new Voice Control languages and the addition of Singapore for countries with air quality maps in the Weather app on iOS 15. Apple has also revealed that iOS 15 has a new SF Arabic system font, and in India, users can choose from up to 10 of their most recently used UPI payment apps when they scan UPI QR codes using the Camera app for merchant payments.

As for the Maps app, Apple removed wording from the iOS 15 features page that said the app would switch to a 3D road-level perspective when approaching a complex interchange. It’s not entirely clear if the feature has been abandoned.

Apple labeled iCloud Private Relay as a beta feature last month, and the iOS 15 features page now states that when using Private Relay, some websites may have issues, such as showing content for the wrong region or requiring extra steps to sign in. This mirrors fine print added to the iCloud Private Relay section of the Settings app on iPhone.

iOS 15 will be released tomorrow following over three months of beta testing. The software update is compatible with the same iPhones as iOS 14, including older devices like the original iPhone SE and iPhone 6s.

When iOS 15 and iPadOS 15 launch this fall, iCloud Private Relay will be included, but Apple plans to provide the features as a public beta rather than a finalized addition. According to Apple’s release notes for the seventh beta of iOS 15, iCloud Private Relay is being released as a public beta to allow Apple to “gather additional feedback and improve website compatibility” before the…

Alongside iOS 15, Apple introduced an iCloud+ service that adds new features to its paid ‌iCloud‌ plans. One of these features is ‌iCloud‌ Private Relay, which is designed to encrypt all of the traffic leaving your device so no one can intercept it or read it. According to Apple, “regulatory reasons” prevent the company from launching Private Relay in China, Belarus, Colombia, Egypt, …

Apple today released iOS 14.8, marking the eighth major update to the iOS operating system that came out in September 2020. iOS 14.8 comes two months after the release of iOS 14.7, an update that introduced MagSafe Battery Pack support. The iOS 14.8 update can be downloaded for free and the software is available on all eligible devices over-the-air in the Settings app. To access the new…

Nomad’s Outlet Sale from last month remains ongoing in September, with a few new items added to the list as well as even steeper discounts. The sale includes AirPods cases, Apple Watch straps, and newly added cases for the iPhone 11 family. These sales have been applied automatically and don’t require a coupon code, and every item in the Outlet Sale is final sale. Note: MacRumors is an…

Amazon has a pair of solid deals on Apple’s AirPods Pro and AirPods Max today, starting at $179.99 for the AirPods Pro, down from $249.00. This is the second-best price we’ve seen on the AirPods Pro since launch, and one of the best prices we’ve tracked in 2021. Note: MacRumors is an affiliate partner with some of these vendors. When you click a link and make a purchase, we may receive a small …

In July of this year, Apple began testing its revamped Maps experience across Italy, following rollouts in the United States, Canada, the United Kingdom, Ireland, Portugal, and Spain. Apple has now officially launched those Maps improvements in Italy, San Marino, Vatican City, and Andorra, according to MacStories. The update brings a raft of previously unavailable Maps features to the…

Apple today seeded the release candidate versions of iOS and iPadOS 15 to developers for testing purposes, with the updates coming two weeks after Apple released the eighth betas. Registered developers can download the profile for the iOS and iPadOS betas from the Apple Developer Center, and once the profile is installed, beta updates will be available over the air. iOS 15 is a major…

Even With iOS 15 Coming Soon, Apple Appears to Be Working on an iOS 14.8 Update

Apple appears to be planning to release at least one more update to the iOS 14 operating system ahead of the launch of iOS 15, according to code spotted in Xcode. There are mentions of all of the released versions of iOS 14 in Xcode, along with a mention of iOS 14.8, which suggests that the new update could be coming in the near future, either ahead of or alongside iOS 15. Spotted in …

A traffic light is seen near the … END_OF_DOCUMENT_TOKEN_TO_BE_REPLACED