Following the last-minute rumor that Apple’s upcoming new MacBook Pro models could feature a notch at the top of the display, much of the online discussion has involved concerns that such a notch would encroach on the active screen area, potentially eating into the macOS menu bar. 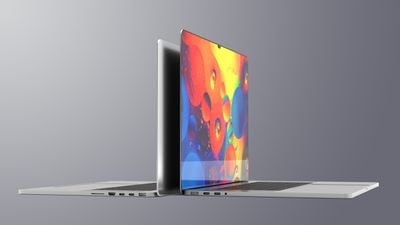 However, it’s worth noting that Apple has explored ways of including a notch in a MacBook Pro display that would avoid ingression into the main screen area, make the notch appear seamless against a black strip, and potentially allow for additional information to be displayed to the user that would also free up menu bar space in the main 16:10 display.

For example, an Apple patent filed in 2019 with the U.S. patent office, titled “Electronic Device Display With Extended Active Area,” describes, among various embodiments, a laptop computer featuring a main rectangular screen and two “extended regions” between the screen and an inactive border, wherein “the first and second rectangular extended regions are on opposing sides of the camera.”

“The first and second extended regions may be located on opposing sides of a camera or other electrical component in a protruding portion or island-shaped portion of the inactive region. Icons or other information may be displayed on a black background in the extended regions, giving the display a continuous unbroken appearance.”

Such an implementation could potentially add system status information in a black strip above the macOS menu bar, but that would of course require a significant adjustment to the way the menu bar operates on these new Mac models in the final release of macOS Monterey, and there’s been no evidence of that so far.

The notch rumor, while seemingly sketchy on its own, has gained some traction since Friday, initially due to a discovery by MacRumors of screen resolutions that will feature in the redesigned 14-inch and 16-inch MacBook Pro models.

The possibility that Friday’s rumor may have substance to it has further been bolstered by an alleged photo of a MacBook Pro screen with a notch that was originally shared by a Weibo account.

Apple is hosting a virtual event on Monday at 10 a.m. Pacific Time, with rumors widely suggesting the event will be focused on redesigned 14-inch and 16-inch MacBook Pro models with a faster version of the M1 chip, brighter mini-LED displays, MagSafe, and additional connectivity.

How to Succeed With the Help of the … END_OF_DOCUMENT_TOKEN_TO_BE_REPLACED

A traffic light is seen near the … END_OF_DOCUMENT_TOKEN_TO_BE_REPLACED