Enabling dark mode on your phone can increase your phone’s battery life, which is something we’ve heard for a while. According to researchers from Purdue University, though, the battery life increase isn’t as great as you may have thought. Plus, a pure black background doesn’t yield many benefits over the dark gray background found in most apps when dark mode is enabled. The study found that enabling dark mode doesn’t give you any major efficiency gains unless you’re looking at it from specific scenarios. The most fruitful battery life gains were found when switching from light mode at full brightness to dark mode.

In the Purdue study (via Android Authority), researchers looked at dark mode power usage from six different applications. Calculator, Google Calendar, Google Maps, Google News, Google Phone, and YouTube were all tested on a Pixel 2, Moto Z3, Pixel 4, and a Pixel 5 — all phones with OLED screens, of course. The researchers tested the power draw when running each of these apps in dark mode for 60 seconds. The researchers said they built a set of tools to accurately measure power draw in pixels.

“When the industry rushed to adopt dark mode, it didn’t have the tools yet to accurately measure power draw by the pixels,” said Charlie Hu, Purdue’s Michael and Katherine Birck Professor of Electrical and Computer Engineering. “But now we’re able to give developers the tools they need to give users more energy-efficient apps.”

At around 30%-50% brightness, the researchers found that switching from light mode to dark mode only saved between 3% and 9% power on average. However, switching the other way around at 100% brightness can save as much as an average of 47% battery power.

“Tests done in the past to compare the effects of light mode with dark mode on battery life have treated the phone as a black box, lumping in OLED display with the phone’s other gazillion components. Our tool can accurately isolate the portion of battery drain by the OLED display,” said Pranab Dash, a Purdue Ph.D. student who worked with Hu on the study.

There were other interesting findings too, including that using the Google News app in light mode at 20% brightness on the Pixel 5 draws the same amount of power as when the phone is at 50% brightness in dark mode. Therefore, if the bright display bothers you, then you can increase the brightness when using it without using much more power overall. 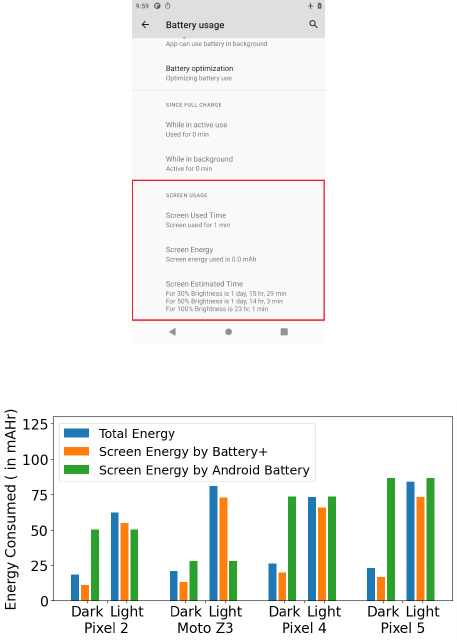 The study also mentions that Android’s battery consumption details do not take dark mode into account, so the team developed a tool called “Android Battery+” which does. The researchers want to open source their display profiling tool and also add the Android Battery+ feature into AOSP.

How to Succeed With the Help of the … END_OF_DOCUMENT_TOKEN_TO_BE_REPLACED

A traffic light is seen near the … END_OF_DOCUMENT_TOKEN_TO_BE_REPLACED