Apple may be forced to remove the Lightning port from the iPhone in favor of USB-C, according to legislation expected be presented by the European Commission next month, Reuters reports. 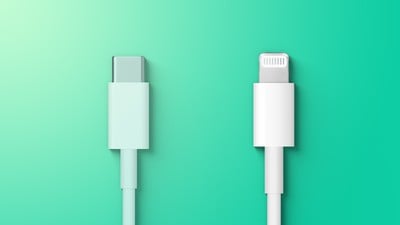 The legislation would establish a common charging port for all mobile phones and other relevant devices in all European Union countries. The move is expected to primarily affect Apple, since many popular Android devices already feature USB-C ports.

In 2018, the European Commission tried to reach a final resolution on the issue but it failed to come into law. At the time, Apple warned that forcing a common charging port on the industry would stifle innovation and create electronic waste as consumers were forced to switch to new cables.

A European Commission impact assessment study conducted in 2019 found that half of all charging cables sold with mobile phones had a USB micro-B connector, 29 percent had a USB-C connector, and 21 percent had a Lightning connector. The study suggested five options for a common charger, with various options that cover ports on devices and ports on power adapters.

Last year, the debate was reignited as the European Parliament overwhelmingly voted in favor of a common charger, citing less environmental waste and user convenience as the main benefits.

The executive branch of the European Union is currently drafting the legislation, according to sources speaking to Reuters, which is expected to be presented next month.

Note: Due to the political or social nature of the discussion regarding this topic, the discussion thread is located in our Political News forum. All forum members and site visitors are welcome to read and follow the thread, but posting is limited to forum members with at least 100 posts.

How to Succeed With the Help of the … END_OF_DOCUMENT_TOKEN_TO_BE_REPLACED

A traffic light is seen near the … END_OF_DOCUMENT_TOKEN_TO_BE_REPLACED