Genshin Impact 2.0 is full of new quests to complete and puzzles to solve, and players may have come across the Sacrificial Offering quest during their travels through Inazuma.

This tricky quest is full of exploration and puzzle solving and players will need to have a keen eye to complete all of the tasks to finish this new Inazuma quest. Players can learn how to find the barrier that is required to complete this quest, along with a guide on completing the other steps required to finish it.

Genshin Impact: How to complete the Sacrificial Offering quest 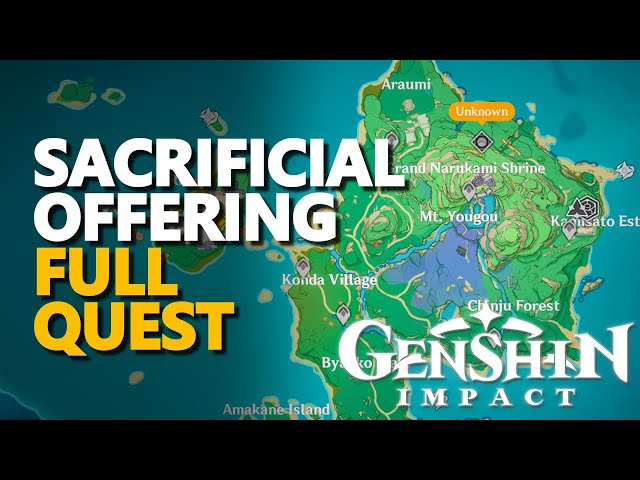 The Sacrificial Offering quest is a new Genshin Impact quest that players can acquire during their travels in Inazuma, and it requires players to perform several tasks to unlock some great rewards. It can be a pretty long quest, so players should make sure that they are ready before they undertake this new mission in Genshin Impact 2.0.

if you’re stuck finding the abandoned shrine, here is the location for it! (i forgot how you obtained the rusty key but it’ll be useful here) although there are two ways to get there i think. I’ve marked it here: pic.twitter.com/QclihjzOEG

To begin this Genshin Impact quest, players will need to head to an Abandoned Shrine that can be found northeast of Konda Village. This shrine is marked on the image above, and players can head there to learn about the history of the shrine and begin the next portion of the quest.

For anyone who needs help with sacrificial offering in Genshin Impact, essentially there are 3 ghosts who you need to talk to. After you speak to them they disappear to another location and you have to speak to them again until they’re all gathered in the same spot with the foxes pic.twitter.com/oTQIWEGkLE

Genshin Impact players can find the first Mysterious Shadow standing in front of the shrine, and interacting with it will make it vanish, prompting Paimon to note on how strange it is.

Players can find the second Mysterious Shadow by turning around from the first one and heading towards the Fox shrine a small distance away. Talking to this Mysterious Shadow will also cause it to vanish, leaving more Shadows to find.

Players can find a third Mysterious Shadow near another smaller shrine, and talking to her will cause her to disappear like the others.

Another Mysterious Shadow is located on the roof of a building a good distance away from the other Shadows, and talking to it will cause it to disappear, leaving just one more Shadow for players to interact with in this Genshin Impact quest.

The final Mysterious Shadow can be found under the branches of a tree just to the side of the trio of Fox Statues, and once it is spoken to, it will join the other two Mysterious Spirits, granting players three chests and progressing this new Genshin Impact quest.

Heading to the Narukami Shrine

Paimon will suggest to players that they get some professional help to solve this problem, and so they will journey to the Narukami Shrine to get some aid. Genshin Impact players will receive a new item called the Memento Lens that they can use to progress this quest.

next, you will have to find a maiden located at the narukami island to help you on the complicated clue. she’ll give you this item called “memento lens”. the 2nd picture shows how it works! the lens will only work on the small kitsune statues that are glowing! pic.twitter.com/uN9VXEEDUB

Once Genshin Impact players get the Memento Lens, they can use it to obtain information by looking at small Fox statues through the lens, which will be an important part of progressing the quest.

Using the Memento Lens on the Kitsune statues:

Players will then be tasked with scanning the small statues with the Memento Lens, which will provide them with phrases they will need to progress the quest further.

Once players scan all the Kitsune, they will have learned the words they need to recite in front of the larger statue.

Genshin Impact players will be tasked with reciting the sacred words in front of the Sky Kitsune statue, and the order is simply the verses from the top to the bottom of the list. Players will need to input them in this order:

After this has been completed, players will be able to move on to the final stage of the quest.

Finding and destroying the barrier in the Sacrificial Offering quest: 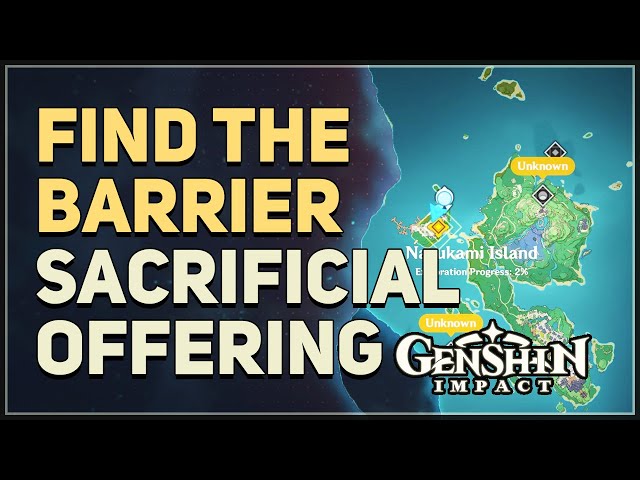 if you found the last kitsune statue, make sure you’ve remembered the lines to recite on the big kitsune statue! although, it’s just in order lol top to bottom then you’ll finally go back to where you have to use the ward to pray! here is how you do the next puzzle! pic.twitter.com/EWUUd3fVpH

Genshin Impact players can do this by interacting with the statues until the ones on the outside feature three Electro symbols, the one in the center has two, and the one on the bottom has one. After this, players will need to interact with the shrine and pray, which will summon an enemy samurai. After players defeat it, the quest is complete.

This Genshin Impact quest can take players a while, but it is part of a long questline in Inazuma that is definitely worth completing for both the rewards and the storyline.

Also read: Perpetual Mechanical Array in Genshin Impact: How to unlock, use, and more details

Elon Musk was invited to the 2021 … END_OF_DOCUMENT_TOKEN_TO_BE_REPLACED

The PS5 Has a New Model, But … END_OF_DOCUMENT_TOKEN_TO_BE_REPLACED