The next-generation MacBook Air that’s set to be released in 2022 will also feature a notch, according to the same leaker who was first to mention the notch coming to the 2021 MacBook Pro models. 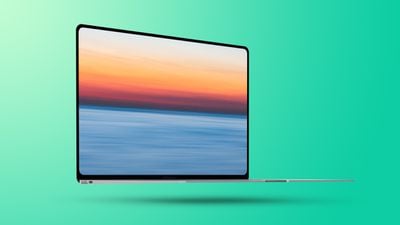 In a forum post from August discussing the new MacBook Pro models, leaker Ty98 said that the next-generation ‌MacBook Air‌ will include the same notch that Apple is introducing for the MacBook Pro.

Other ‌MacBook Air‌ rumors have indeed suggested that Apple is designing a thinner and lighter version of the machine with thinner bezels than the current model. It is expected to feature a 13-inch mini-LED display, several color options, and an updated version of the M1 chip.

Serif today announced across-the-board updates for its popular suite of Affinity creative apps, including Affinity Photo, Affinity Designer, and the Apple award-winning Affinity Publisher for Mac, all of which were among the first professional creative suites to be optimized for Apple’s new M1 chip. ”After another year which saw record numbers of people switching to Affinity, it’s exciting to…

As is tradition, Apple executives Craig Federighi and Greg Joswiak joined Daring Fireball’s John Gruber in an episode of The Talk Show to discuss several announcements that Apple made over this weeks WWDC, including iPadOS 15, macOS Monterey, and a large focus around privacy. Federighi kicks off the conversation discussing the common architecture, now thanks to Apple silicon, across all of…

YouTube is planning to stop supporting its YouTube app on the third-generation Apple TV models, where YouTube has long been available as a channel option. A 9to5Mac reader received a message about the upcoming app discontinuation, which is set to take place in March.Starting early March, the YouTube app will no longer be available on Apple TV (3rd generation). You can still watch YouTube on…

Google and the three major U.S. carriers, including Verizon, AT&T, and T-Mobile, will all support a new communications protocol on Android smartphones starting in 2022, a move that puts pressure on Apple to adopt a new cross-platform messaging standard and may present a challenge to iMessage. Verizon recently announced that it is planning to adopt Messages by Google as its default messaging…

YouTube Premium Subscribers Can Now Use iOS Picture-in-Picture: Here’s How

Google has rolled out picture-in-picture support as an “experimental” feature for YouTube premium subscribers, allowing them to watch video in a small window when the app is closed. If you’re a premium YouTube subscriber looking to try out picture-in-picture, follow these steps: Launch a web browser and sign into your YouTube account at YouTube.com. Navigate to www.youtube.com/new. Scroll…

Twitter today introduced Snapchat-style QR codes, which are designed to make it easier to find and follow friends on the social network. Each Twitter QR code is unique to an individual Twitter user, so when scanned, it’ll bring up the person’s account. To access your Twitter QR code, you’ll need the official Twitter app for iOS. In the app, go to your profile, tap on the gear icon, and select…

Apple today seeded the sixth developer beta of macOS Monterey, the newest version of the macOS operating system. The sixth beta comes three weeks after Apple released the fifth macOS Monterey beta. Registered developers can download the beta through the Apple Developer Center and once the appropriate profile is installed, betas will be available through the Software Update mechanism in…

A traffic light is seen near the … END_OF_DOCUMENT_TOKEN_TO_BE_REPLACED