Siri has apparently prematurely revealed that Apple plans to hold an event on Tuesday, April 20, where the company is expected to reveal brand new iPad Pro models and possibly its long-awaited AirTags trackers. 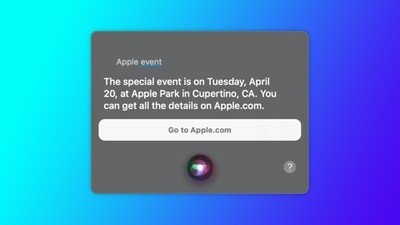 Upon being asked “When is the next Apple Event,” ‌Siri‌ is currently responding with, “The special event is on Tuesday, April 20, at Apple Park in Cupertino, CA. You can get all the details on Apple.com.” The event will likely be a pre-recorded affair without media in attendance and should be live-streamed on Apple’s website and YouTube channel.

‌Siri‌ is not providing the information in all instances and will in some cases simply refer you to Apple’s website for information on events, but multiple MacRumors editors and readers have seen the premature information across Apple devices including iPhone, iPad, Mac, and HomePod.

Apple typically sends out press invitations for its digital events around a week before the actual event, so it seems likely that Apple will confirm the event later today. Bloomberg has reported that Apple plans to showcase a brand new 12.9-inch iPad Pro with new mini-LED display technology in the middle of this month.

How to Succeed With the Help of the … END_OF_DOCUMENT_TOKEN_TO_BE_REPLACED

A traffic light is seen near the … END_OF_DOCUMENT_TOKEN_TO_BE_REPLACED