The Electrify Your Ride EV Incentive Program is offering $700,000 total in rebates to those in Santa Cruz, San Benito and Monterey counties on a first-come-first-serve basis.

Central Coast Community Energy, or 3CE, is one of 23 public agencies in the state that sources predominantly clean and renewable energy, such as solar and geothermal, rather than fossil-fuel sources.

“We strictly provide electric generation services, while PG&E continues to maintain their poles and wires, and continues to deliver energy to people’s homes through their infrastructure,” said Shelly Whitworth, senior energy media specialist with 3CE.

Residents might see 3CE as line item on their monthly electric bill. According to Whitworth the agency maintains approximately 100,000 accounts across the Santa Cruz area. Those who are 3CE customers, including local businesses, are eligible for a variety of new and used electric car rebates, below: 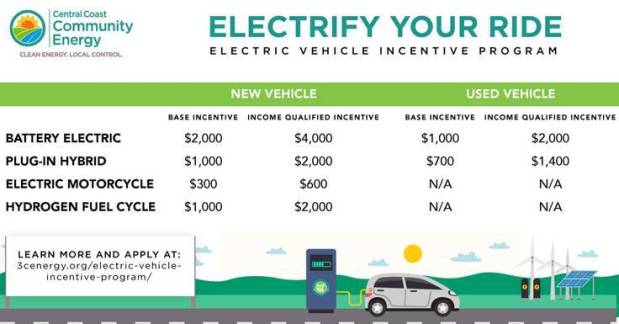 “The income qualification element of this…where someone can save up to $15,000 combining and stacking all the savings at once, it really opens the accessibility of clean vehicles,” Whitworth said.

While electric cars coming on to the market now are more affordable compared to their predecessors, and projected to become cheaper in the future, another part of the equation is electric vehicle infrastructure.

Central Coast Community Energy is also working with the state to implement $7 million in funding the construction of electric vehicle charging stations across the Central Coast, and in Santa Cruz.

Currently, less than 2% of cars on the road in the Central California Coast region are electric, according to a 3CE report. The agency hopes the incentive program, and more charging infrastructure coming down the pipeline, could amp that number up.

In a video from REE Automotive, a … END_OF_DOCUMENT_TOKEN_TO_BE_REPLACED

The iPhone 12 got a fresh new … END_OF_DOCUMENT_TOKEN_TO_BE_REPLACED