NEW DELHI — Looking to scale up its green energy portfolio from 4 gigawatts at present to 25 GW by 2030, Indian electricity producer Tata Power is betting heavily on the “huge potential” that the South Asian nation of over 1.3 billion people offers in the field of renewable energy.

“For a country like India, renewable is a very good source” of energy, Praveer Sinha, Tata Power’s CEO and managing director, told Nikkei Asia in an exclusive interview, pointing out that most parts of the country have a lot of sunshine throughout the year unlike, for example, Europe, which has a lot of cloudy days and snowfall. “So for us, this is a very important opportunity to leverage and see how we can increase our generation through renewable sources.”

Sinha said the company aims to provide “excellent 24-7 renewable solutions” through a combination of solar, wind and other power sources, offering a range of services to customers.

The power generation unit of India’s largest conglomerate, Tata Group, hopes to add 2 GW of orders every year to meet its 2030 target. Clean energy currently makes up 30% of Tata Power’s portfolio, which it hopes to double by 2025.

On Tuesday, the company said its solar wing had bagged orders worth 5.38 billion rupees ($71.7 million) from state-run company Energy Efficiency Services to build 100 MW of solar projects. Tata Power is active in both conventional and renewable energy, power transmission and distribution and newer consumer-oriented businesses such as rooftop solar power and electric-vehicle charging stations.

The government of Prime Minister Narendra Modi has put special emphasis on green energy. It announced in August that total installed renewable energy capacity in India had exceeded 100 GW, a milestone in the country’s effort to reach 450 GW by 2030 — the same year by which it aims to have 30% electric vehicle penetration. At present fewer than 1% of the country’s vehicles are electrically powered.

Under the PM-KUSUM initiative, the government seeks to provide clean energy to more than 3.5 million farmers by converting their irrigation pumps to solar power.

According to government data, diesel-powered irrigation pumps use more than 5.5 billion liters of fuel a year and emit 15.4 million tons of carbon dioxide. More than 20 million other pumps that are connected to the power grid consume 213 billion units of electricity annually, or 18% of India’s total power consumption. 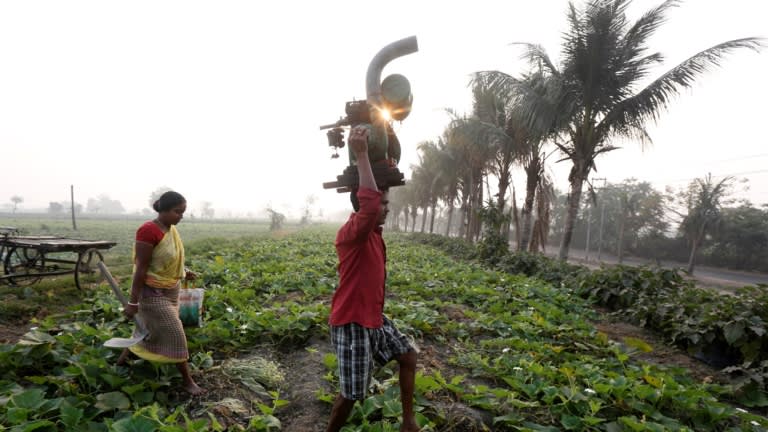 A farmer carries a water pump to irrigate his vegetable field in Kolkata. The Indian government aims to convert the irrigation pumps of more than 3.5 million farmers to solar power.

The PM KUSUM initiative, Sinha said, proposes to convert nearly 4 million of the country’s 9 million diesel-powered pumps to solar power. “The rest will still continue to be on diesel,” he said. “So, there is an opportunity to scale those 5 million [pumps], and then [convert] all the 30 million to solar.”

“It’s a win-win for everyone and a fantastic solution if it can be implemented right across the country,” he said, adding that every farmer with a pump set will then have a solar energy generation facility independent of the electricity grid, and thus be in a position to meet their own energy requirements.

Tata Power, for its part, is looking to meet growing demand for electricity to get electric cars rolling. The company is the largest provider of vehicle charging infrastructure in the country, having installed nearly 1,000 charging points in about 170 cities.

“Basically, what we are doing is we are creating the EV infrastructure” in the country, Sinha said, pointing out that Tata Power has installed public chargers in bus stations, malls, coffee shops, banks and other locations. “We also do [it] for fleet owners like Uber and Ola.”

Sinha said the company has an “ambitious” plan to install EV chargers over a 3,600 km stretch from India’s northernmost region of Kashmir to Kanyakumari, a town at the southern tip of the country. “We will do 10,000 [chargers] in the next three years, and then will take it to 100,000 in the next 10 years.”

“Over the next five years, this [new] company will create a portfolio of 10 EVs and, in association with Tata Power Ltd., catalyze the creation of a widespread charging infrastructure to facilitate rapid EV adoption in India,” a Tata Motors statement said.

In the wide-ranging interview, Sinha also responded to questions about the current coal shortage in India that has hit headlines globally. “I would say [it] is a temporary thing,” he said, adding the demand for energy is huge in October, as it is a “very bad” month in terms of humidity. He added that all manufacturing activity, industries and commercial establishments have now fully opened after remaining suspended for months due to the COVID-19 pandemic.

“All of a sudden, because of so much of demand [for] electricity, the generation has to ramp up very quickly. That is creating the trouble,” he said, expressing hope that in the next few weeks, when the early signs of winter start around mid-November, demand will fall.

A traffic light is seen near the … END_OF_DOCUMENT_TOKEN_TO_BE_REPLACED